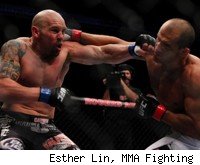 By the time it was all over and dos Santos had won the unanimous decision victory in dominant fashion, UFC heavyweight champion Cain Velasquez had plenty of footage on the dangerous jab that will likely be coming his way some time in the fall.

"Much respect for Cain Velasquez," dos Santos said after winning the No. 1 contender bout at UFC 131. "But Cain, I'm coming for you."


More Coverage: UFC 131 Results | UFC 131 Post-Fight Press Conference
With the win, dos Santos essentially earned the title shot he'd already been promised last summer after beating Roy Nelson, only this time he also proved that he has the chops in the wrestling department as well as the striking.

Carwin wasted little time trying to get him to the mat in the first round, but throughout the bout dos Santos either shrugged off the takedown attempts or popped right back up after being put down. Perhaps most surprisingly, he even managed two takedowns of his own in the final frame.

His most dominant moments came in the final minutes of the first round, however. After battering Carwin with jabs and left hooks, dos Santos dropped the former interim heavyweight champ and then hammered him with a barrage of left hands that had referee Herb Dean very close to stopping the fight. Dos Santos even looked up at Dean at one point during the assault, as if wondering what was taking him so long to jump in and wave it off.

"Yeah, because I was getting tired," dos Santos said in the post-fight press conference. "And he didn't stop the fight, so I asked him, 'Hey, stop it, man.' And he said, 'Keep going, keep going, keep going.' And then Shane made a good defense, but I think it was the right decision by the referee, because you saw Shane Carwin go back [to] standing and fighting with me. It was a good decision."


Carwin barely managed to survive the first round, and when he came out for the second the effects of that barrage were etched into his face. At one point Dean paused the bout to let the doctor look at his swollen, bloodied face and the cuts around his eyes. But Carwin gamely soldiered on and finished the fight, perhaps earning a moral victory by proving that he has not only the cardio, but also the fortitude to go the distance.

"It was a nasty first round and Shane Carwin's a very tough guy," said UFC president Dana White. "When you get big guys in there that are hitting as hard as they both are, it's impressive to see it go three rounds."

By the time the final horn sounded, though, we hardly needed to look at the judges' scorecards to know who the winner was. While dos Santos looked like he'd barely been touched, Carwin had the face of a man who'd gotten the worst of a high-speed car wreck.

The victory marked dos Santos' biggest win to date in his MMA career, but the Brazilian acknowledged that his toughest test will likely come in the form of Velasquez, who's widely considered the world's best heavyweight.

"I think my biggest challenge is coming, because Cain Velasquez is the champion and he deserves that. He proved he is very good, so I will be ready for him."

And while White said he was impressed by dos Santos' win over Carwin, he also added that he thinks the challenger will be in for a different type of fight when he finally gets his chance to vie for the heavyweight title, which White estimated would happen approximately five months from now, if all goes according to plan.