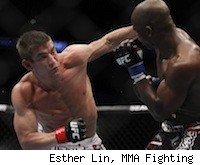 After much much concern about Stanley Cup-crazed Vancouver not turning out for UFC 131, the event drew 14,685 fans to Rogers Arena, drawing a $2.8 million gate. While those numbers aren't close to the huge numbers the UFC usually draws on trips across the Canadian border, it's still a healthy set of figures for a card that lost the sport's biggest draw

Other big numbers on Saturday night went on the checks written out to the nightly awards winners, $70,000 apiece.

Capturing the Fight of the Night award was a heavyweight tilt between debuting big men Dave Herman and Jon Olav Einemo.

The fight saw several momentum shifts throughout, particularly in a wild second round, before Herman finally put an end to the action at 3:19 of round two with a TKO.

Submission of the night went to undefeated middleweight Chris Weidman, who forced Jesse Bongfeldt to tap out with a standing guillotine choke in the final seconds of round one. It was one of only two submissions on the night. The other was Nick Ring forcing James Head to tap to a rear naked choke.

Meanwhile, the Knockout of the Night went to lightweight Sam Stout, who landed a picture-perfect left hook on the jaw of Yves Edwards, knocking the longtime veteran unconscious at 3:52 of the first round. Afterward, Stout joked about the award.

"I call myself 'Hands of Stone' but I haven't knocked anybody out in five years," he said. "I was starting to get a little worried about it."

In reality, it was Stout's first knockout since September 2007, when he fought on a card outside of the UFC. It was his first KO inside the promotion, and it came in his 11th UFC fight.