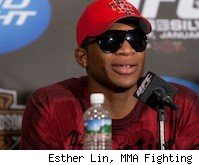 The heavy-handed strikers, both coming off losses, have agreed to meet in a welterweight clash prior to the heavily anticipated main event.

Interestingly, both fighters are coming off losses to Nick Diaz, who recently abandoned his welterweight championship to move over to the UFC and challenge its long-reigning 170-pound kingpin Georges St-Pierre.

"I'm happy to be fighting again," Daley said in the press release. "It's a big fight. For those who haven't seen the Melvin Manhoef vs. Cyborg fight, watch it and expect the same outcome for Cyborg ... He'll be knocked out."

Santos, meanwhile, had his crack at Diaz in January, surviving into the second before losing via armbar submission. With the loss, he fell to 18-14.

The July 30 event takes place at the Sears Centre in Hoffman Estates, Illinois. To date, the heavyweight bout pitting legends Fedor Emelianenko and Dan Henderson is the only officially announced match.