Mark Munoz vs. Demian Maia Was UFC 131's True Fight of the Night 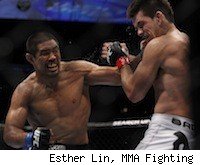 UFC president Dana White is never shy about voicing his displeasure with cageside judges. As a matter of fact, he did so last night, rightfully criticizing scorecards in a Michihiro Omigawa decision loss that was widely considered wrong, as well as a lone judge who scored round one of Kenny Florian vs. Diego Nunes for the former, even after the latter dropped him and outworked him in round one.

Judgment calls are exactly what the words imply, a perception based on individual sensibilities. Rarely will they result in 100 percent agreement.

Case in point is last night's bonus awards, a judgment call that comes from White. Essentially, he makes a judges' decision at the end of the night that results in some extra cash in the pockets of the fighters. At the close of UFC 131, he awarded $70,000 each to Dave Herman and Jon Olav Einemo for Fight of the Night, but in my view, that money belonged to Mark Munoz and Demian Maia.

First off, let's temper any criticism of White. The Herman-Einemo fight was wildly entertaining for the eight minutes and 19 seconds it lasted. The big men battered each other with power shots, it had momentum swings, and it looked like either was on the verge of winning multiple times before Herman closed the show with a second-round TKO.

It was a fun and competitive fight, but it was not a great fight.

If you want to show fans a great mixed martial arts bout, skip ahead a few minutes in the UFC 131 broadcast to Maia vs. Munoz. Rarely would you describe a bout as "beautiful," but I think this was one of those times. Why? This fight gave you a little bit of everything, illustrated the vast complexities of the fight game and showcased two high-level fighters capable of finishing the fight anywhere.

With most matchups, you have a generally good idea of how a fight will play out, but from the beginning, this one went against script. Maia, once upon a time an awkward and light puncher, was snapping off combinations with power, and Munoz looked flummoxed. Maia even dazed him once with a left hook behind the ear. Since most had expected Munoz to have a sizable advantage in the standup department -- particularly in power -- the bout became suddenly more compelling. If Maia can out-work him on the feet, and we know he has the advantage on the ground, how can Munoz win?

One of the biggest ways in which MMA is unlike boxing is that you have very little time to make adjustments. In boxing, you can lose two or three rounds, and still have most of the fight to figure out your path to victory. In MMA, if you lose the first round of a three-round fight, it's almost immediately panic time. Munoz had to know he was behind on the judges' scorecards, and he had to figure out the best way to attack a grappling specialist who had just outworked him on the feet. No easy task, but that's the fight within the fight.

But the second round was even more compelling than the first. Interestingly, Maia changed up his plan, looking for several takedowns against Munoz. Perhaps he figured he had Munoz shook up and could take advantage of the situation. Instead, Munoz was ready, and he largely out-grappled the fantastic grappler during a series of brilliant exchanges and position reversals, punishing him after failed takedown tries and attempts to pull guard.

So after round two, we had a situation where the grappler won round one with standup, and the power puncher had won round two by outworking the submission wizard on the ground. Exactly what we expected, right?

It was no surprise that the pace slowed in round three, but there were still a few excellent moments, including one in which Maia had Munoz in a reverse crucifix on his back, but Munoz escaped. The final few minutes were tense and taut, each knowing a win was riding in the balance. By the end, it was razor close, and no one quite knew who would get the decision, a drama to the last seconds. Finally, it was Munoz awarded the victory.

A great fight is not always about two guys trading leather with reckless abandon. It's also about two high-level fighters surprising each other with unexpected game plans, adjusting on the fly, and showing technical brilliance for 15 minutes. Herman and Einemo may be going home with the cash, but it was Munoz and Maia who put on a true display of MMA at its best.