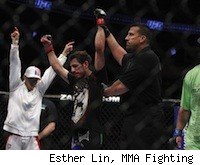 VANCOUVER, British Columbia – With a unanimous decision win over Diego Nunes at UFC 131 on Saturday night, Kenny Florian not only successfully competed in the fourth weight class of his UFC career, he also "more than likely" earned himself a shot at UFC featherweight champion Jose Aldo, according to Dana White.

"I thought it was a great fight," said the UFC president. "There's no doubt Diego is a tough guy, and [Florian] looked great tonight. I was curious. You never know until you see a guy fight after doing that kind of a cut."

Florian, who made his 145-pound debut after failed bids to win a title at 155 pounds, said the drop in weight was "the hardest thing I've ever done in my life," but insisted that he didn't feel too affected by it during the fight itself.


More Coverage: UFC 131 Results | UFC 131 Post-Fight Press Conference
"Actually, I felt great out there," Florian said in the post-fight press conference. "During the fight I felt real good. I actually felt I got stronger as the fight went on. It's tough. That little guy is fast, and I think my timing was a little off in the first round. But once I was able to adjust, I felt great, and felt I was actually able to outlast him."

Using takedowns and brutal elbows on the ground in the final round, Florian opened up a cut in Nunes scalp that bleed profusely in the final minutes. He also handed Nunes his second defeat in eighteen fights, and impressed White as much with his performance as with his willingness to rile up the Vancouver crowd by sporting his Boston Bruins jersey on the same day as the Stanley Cup finals game between the Canucks and the Bruins.

"I got to respect him," White said. "They better give him a ticker-tape [parade] when he gets back to Boston. ...People ask me, 'Aren't you from Boston too?' I say, 'I've never even been to Boston, man.'"

Florian joked that he "saw a lot of middle fingers" in the crowd before and after his fight, and added that might need to have metal detectors installed outside his after-party in Vancouver just to ensure his safety.

But while he had "several points" during his weight cut where he was wondering if a move to featherweight was such a good idea, Florian said, in the end it's all part of an effort to become a UFC champion.

"I'm staying at featherweight. I want a shot at the belt. I think Jose Aldo's one of the best fighters in the game. Lot of respect for him, big fan, but I think every UFC fighter's dream is and should be to be a champion and to test yourself against the best. He's one of the best, and that's what I want. We'll see after that."

White stopped just short of officially declaring Florian the next challenger for Aldo's title, but did say it was probable that he'd get the shot after his victorious debut in the new weight class.

"He deserves a shot at the title," said White. "No doubt about it."