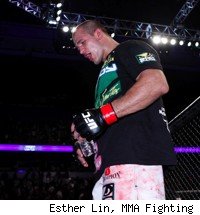 Junior dos Santos had not even gotten back to his locker room by the time fans and media everywhere were deep in thought about his future UFC heavyweight championship bout with Cain Velasquez.

According to noted MMA linesmaker Nick Kalikas, dos Santos is a slight edge in the possible fall matchup.


Just moments after UFC 131 ended, Kalikas installed dos Santos as a -125 favorite, giving him a very slight edge over the champion, who was listed at -105.

On Saturday night, dos Santos won a convincing unanimous decision over Shane Carwin, lumping him up over the course of the three-round fight after nearly finishing him in the first.

Dos Santos (13-1) has yet to lose in the UFC, winning seven straight bouts. He's only failed to finish two of those, but even in those, he's been dominant. Against Carwin, he out-landed him 104-22 according to FightMetric.com.

Also according to the site, the two are No. 1 and No. 2 in UFC history in strikes landed per minute, with Velasquez landing the way at 7.46 per minute and JDS just behind at 6.79.

The unbeaten Velasquez (9-0) is still recovering from shoulder surgery stemming from an injury suffered in his title win against Brock Lesnar last October. The UFC is hoping that he will be ready to return for an October event in Houston, though that fight is not yet official.