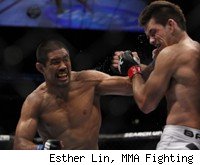 A great 15-minute battle had a controversial ending Saturday night at UFC 131, as Mark Munoz beat Demian Maia by unanimous decision in a fight that could have gone either way.

The judges scored it 30-27, 29-28 and 29-28 for Munoz, which was something of a surprise: Maia appeared to clearly win at least the first round, and possibly the third as well. Munoz himself acknowledged that Maia had him in trouble in the first round.

"He did surprise me," Munoz said after the fight. "He caught me in that first round. I was like, 'Whoa!' ... I wasn't expecting him to be this strong. But he was strong. I told him it was a true honor to fight him in the cage."
http://xml.channel.aol.com/xmlpublisher/fetch.v2.xml?option=expand_relative_urls&dataUrlNodes=uiConfig,feedConfig,localizationConfig,entry&id=1002055&pid=1002054&uts=1307851504
http://www.aolcdn.com/ke/media_gallery/v1/ke_media_gallery_wrapper.swf
UFC 131 Fight Night Photos
Yves Edwards is knocked out at UFC 131 on Saturday, June 11, 2011 at the Rogers Arena in Vancouver, British Columbia, Canada.
Esther Lin, MMA Fighting
Esther Lin, MMA Fighting

More Coverage: UFC 131 Results | Mark Munoz vs. Demian Maia Live Blog
Maia landed a couple of hard punches early in the first round, and that took Munoz by surprise: Maia is usually a grappler, not a striker, and Munoz seemed a little stunned at how hard Maia was hitting him. As the round wore on Maia stalked Munoz, hit him repeatedly, and easily took the round as Munoz looked baffled at how Maia was getting to him so easily.

At the start of the second round, however, it was Munoz who hit Maia hard and then wrapped him up on the ground. For the rest of the round Munoz was the one pushing the action, and Maia was the one just trying to hold on. It was a very good second round for Munoz, and the fight looked even heading into the third.

Early in the third Maia showed off his world-class Brazilian jiu jitsu skills, getting Munoz's back, putting him in a crucifix and nearly forcing him to tap from a neck crank, but Munoz showed great poise and managed to pull himself free and get back to his feet. In the closing minutes of the third round it was a back-and-forth battle, and the fight easily could have gone either way.

But only one man could leave the Octagon the winner, and all three judges agreed it was Munoz.