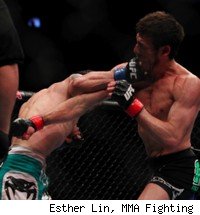 VANCOUVER, British Columbia – This is the UFC 131 live blog for Kenny Florian vs. Diego Nunes, a featherweight bout on tonight's UFC pay-per-view at the Rogers Arena.

More Coverage: UFC 131 Results | Latest UFC 131 News
Round 1: The crowd lets Boston's own, Kenny Florian, hear it before the start. They'll never forgive him for wearing that Bruins jersey to the weigh-in, will they? Florian tries a high kick, and Nunes answers with one of his own, but slips in the process. Florian ducks under a looping hook from Nunes and goes for the takedown. He keeps after it, but Nunes blatantly grabs the fence and holds on for several seconds before referee John McCarthy says something. Even then, Nunes successfully cheated to avoid a takedown, and with no consequences. Nunes turns the tables, putting Florian down, but only briefly. Spinning backfist from Nunes lands, and Florian tries a head kick that misses. Florian stings Nunes with a good jab, then ducks under a punch for an excellent takedown. Nunes won't stay down long, though. A left hook from Nunes in the final ten seconds drops Florian onto his back, but time rounds out before he can capitalize. MMA Fighting scores it 10-9 for Nunes.

Round 2: The fighters square off to start the second, but the crowd is busy doing the wave right now, so they'll get back to this fighting stuff in a minute. Florian looks for a single-leg and nearly has it, but Nunes displays some impressive balance and flexibility in avoiding it. Florian keeps digging, and Nunes keeps grabbing the fence, causing McCarthy to swat his hand away. Nunes gets a leg-trip takedown, but nearly gets himself caught in a triangle while trying to work from Florian's guard. Nunes stands up out of the guard and kicks at Florian's legs before McCarthy brings him up. Again Florian ducks under a punch for a perfectly-timed takedown, putting Nunes on his back. Florian works from half-guard before Nunes replaces the full guard, but that only seems to free Florian up to throw punches. Florian passes to the side with an elbow strike right at the horn. MMA Fighting scores it 10-9 for Florian.

Round 3: They touch gloves to start the third. The crowd chants 'We want the cup,' just in case you forgot. Both fighters are looking a little worn, but Florian shows no signs of slowing even after a tough weight cut. Florian puts Nunes down with a double-leg and then smashes him with an elbow that thuds home. Florian stands up to pass and then dives down with a big right hand as he moves to side control. Nunes stays patient and scrambles to his feet. They separate and Nunes fires off a high kick and then a spinning backfist. Florian backs up and pops him with a jab. Nunes comes charging in with hooks and Florian avoids him, then counters with a short right. Moments later, the exact same scenario repeats itself. Good knee by Florian in the final thirty seconds. He stays after Nunes, but Nunes clips him with a right-left combo that drops Florian to one knee just before the horn. MMA Fighting scores it 10-9 for Florian.