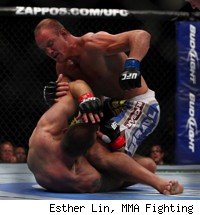 VANCOUVER, British Columbia – This is the UFC 131 live blog for Jon Olav Einemo vs. Dave Herman, a heavyweight bout on tonight's UFC pay-per-view at the Rogers Arena.

Round 1: Einemo signals to Herman that he does not want to touch gloves, so consider the tone of this fight set. Einemo charges across the cage and eats a knee that pushes him back. Undaunted, he presses on into the clinch, but Herman gets some space and hammers him with a knee to the head. Einemo responds with a right hand. Herman is smiling at him as they square off in the center of the cage. Good punch combo from Herman. He tries a kick and Einemo catches it and uses it to put him down for the first time in this fight. Einemo goes to half-guard and tries to tie up Herman's arm, but Herman escapes back to his feet. A good 1-2 lands for Einemo, but it doesn't succeed in knocking the smile off Herman's face. Herman again works the knees from the clinch, but Einemo comes over the top with elbows. One last leg trip from Einemo before the round ends. MMA Fighting scores it 10-9 for Einemo.

Round 2: Einemo walks Herman down behind his left-right combo, then moves in for a clinch that goes nowhere. Einemo eats a shot but keeps coming after Herman, who's spending a lot of time backing up. Einemo wings that overhand right of his, but Herman seems unfazed even when it lands cleanly. Herman kicks Einemo's leg out from under him just as he goes to punch. A big knee and a punch from Herman drops Einemo flat on his back. Herman hammers him with punches and elbows, but the big man recovers and Herman lets him up. More knees, and Einemo is slowing, but still coming forward. Herman tags him again and Einemo sinks to the mat, trying to pull Herman in close. Herman pounds Einemo with right hands until the referee has seen enough. Gutsy fight from both men, and a great UFC debut for Herman.

Dave Herman def. Jon Olav Einemo via TKO (punches) at 3:19 of round two.