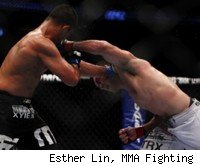 VANCOUVER, British Columbia – This is the UFC 131 live blog for Demian Maia vs. Mark Munoz, a middleweight bout on tonight's UFC pay-per-view at the Rogers Arena.

Maia (14-2) has won his last two fights against Mario Miranda and Kendall Grove. Munoz (10-2) is also looking for his third straight win after beating Aaron Simpson and C.B. Dollaway.

More Coverage: UFC 131 Results | Latest UFC 131 News
Round 1: They spend the first thirty seconds feeling each other out, then Munoz starts throwing the aforementioned bombs. Maia fires back, and moments later lands a nice left on his way into the clinch. He has Munoz pinned against the fence, but can't do much with it and the referee pulls them apart. Maia presses forward with a head kick. His stand-up continues to improve with each fight. Another head kick from Maia leads him into the clinch again, and this time they separate on their own. Maia comes in with a left and Munoz meets him with a right hand. Munoz whiffs on a head kick and Maia counters beautifully with an uppercut. Munoz goes on the attack in the final thirty seconds, and Maia just looks to avoid his heavy hands. Munoz looks for a takedown with ten seconds left, but runs out of time before he can finish. MMA Fighting scores the round 10-9 for Maia.

Round 2: They square off in the center of the cage and Munoz misses with a right, but comes back with a left that hurts Maia. Maia shrinks away and Munoz follows him, stopping a takedown and hammering away at Maia's head, body, and thighs -- whatever's uncovered at any given moment -- with his right hand. Maia recovers and gets back up, only to take a hard shot to the forehead. Maia gets Munoz down with top position and works for mount. The crowd senses the danger for Munoz, but he stays calm and works back to his feet. Another takedown attempt by Maia, but this time it's Munoz who ends up on top in guard. Maia gets to his feet, only to be taken down again. Maia sits up against the fence with Munoz in his half-guard, trying to work short punches. The referee brings them to their feet in the last seconds of the round. The crowd grows restless. MMA Fighting scores the round 10-9 for Munoz.

Round 3: An awkward bro hug starts the last round. Maia steps to the side to avoid a Munoz punch and stings him with a good left. Munoz gets in deep with a takedown attempt and tosses Maia to the mat with a single-leg. He's not quick enough on the follow-up though, and Maia scrambles up and ties him up on the mat. Maia has a crucifix position on Munoz's back, cranking his neck, but Munoz escapes and gets up looking for the clinch and a leg trip. They separate and Munoz fires off a lunging 1-2, but eats a knee in response. Against Munoz throws Maia with the single-leg, but can't follow it. Maia shoots in deep in the final twenty seconds, but Munoz stops him. They end the fight winging wide haymakers at one another, both near exhaustion. MMA Fighting scores the round 10-9 for Munoz.