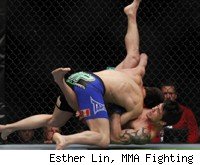 In his featherweight debut, Kenny Florian showed that he's one of the best featherweights in the world. Next he may get the chance to show that he's the very best.

After the fight, Florian said that getting down to featherweight, having previously fought at lightweight or higher, had been tough for him.

"That was the hardest thing I've ever done in my life," Florian said of cutting to 145 pounds.

Nunes looked solid in the first round, getting the better of the striking exchanges in the early going and also flooring Florian with a 1-2 in the closing seconds. Florian did have a very good takedown and landed a couple of good strikes of of his own, but Nunes deserved to win the first.

In the second round, however, Nunes began to look tired and Florian seemed fresh. When Nunes managed to get Florian on his back, it was Florian who punished Nunes with elbows to the bottom. And later in the round Florian secured a great takedown and put Nunes on his back. It was a very good second round for Florian.

A minute into the third round Florian took Nunes down again, and he mostly controlled it from there, both on the ground and when they returned to their feet. In the last couple of seconds of the fight Nunes actually connected with a very hard combination that knocked Florian down to one knee, but that wasn't enough to change the fact that Florian had won the round, and the fight.

Florian made no secret that he wants to fight for Aldo's title, saying afterward, "I want to make a run for that belt."