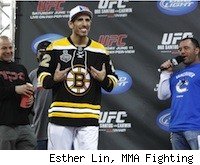 VANCOUVER, British Columbia – Late Friday night a taxi crammed full of men in Canucks jerseys rounded a downtown street corner just as the man in the front passenger seat stuck his head out the window and asked a passing stranger, 'Hey, who won the game?'

This got laughs all down the block. Canadian hockey humor.

As if the massive victory celebration wasn't obvious even to passing aircraft. As if you could be anywhere in Vancouver and not get swept up in the throng after the Canucks beat the Boston Bruins on Friday night to go up 3-2 in the Stanley Cup finals.

Even for the world's biggest MMA organization, that's tough to compete with. That's why it's smart for UFC president Dana White to try and swim with the tide on this one rather than against it.

"The thing about coming up to Canada, people love the hockey up here," White told reporters following the UFC 131 pre-fight press conference on Thursday. "It's the only thing anybody cares about. It's part of this culture. They treat us so well here, I feel like we're the number two sport behind hockey. So when they've got their championship going on, I absolutely respect that, a hundred percent."

That's good, because he really has no choice.

White did the smart thing by professing to the local media his respect and admiration for hockey players' skill and toughness – though he also felt it necessary to express his utter disdain for soccer, for some reason. By cozying up to the hockey fever that has gripped Vancouver, maybe he can get a little of the media magic to rub off on his own sporting event at the Rogers Centre tonight.

It's already worked to some degree. For instance, the weigh-in staredown between Boston native Kenny Florian (clad in a Bruins jersey) and Brazilian Diego Nunes (who conveniently became a Canucks supporter) made a brief appearance during Friday night's hockey broadcast. As long as the Canucks are the big story – if not the only story – why not see if you can piggyback on it?

The question is, how much money and/or sporting enthusiasm do fans here have left after last night's post-game debauchery? Well into early Saturday morning the sound of car horns honking and vuvuzelas – what's the word...vuvuzela-ing? – wafted through the streets. Canucks fans drank and danced in the streets, and nobody got more than half a block without being forced to high-five or hug at least three strangers.

But now that the bar tabs have been paid and the hangovers have settled in, even this rowdy bunch likely needs a little quiet time.

White insists that too much is being made of all this, of course, and he's at least partially right.

"Everybody's talking like this thing is a disaster," he said on Thursday. "It's not. We're happy to be here and the show's going to be successful."

At the same time, it isn't likely to sell out. You also have to wonder how many ticket-holders will be in their seats when the first fights start up at around 3 p.m. local time, and how many will still be rehydrating and trying to figure out which bar they left their credit cards at (not that I'm judging – we've all been there).

Is that disastrous for the UFC? No. Inconvenient? A little.

It's still a good card, and it will probably still draw a good crowd of fans who either celebrated in moderation last night or else just love MMA more than they hate pounding headaches. Maybe some will even decide to keep the party going all the way until fight time, though that could get ugly by the time we get to the main event.

The UFC might as well join 'em, since there's no way it can beat 'em. Not in Vancouver, and not this week.

And who knows, maybe there are some hockey fans who will show up or tune in just in the hopes of seeing the Boston boy Florian get beat up. If there's anything that can match this city's love for the Canucks right now, it's their hatred of the Bruins.