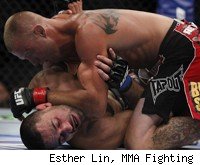 Donald Cerrone won a dominant, one-sided decision over Vagner Rocha at UFC 131, winning handily but coasting to an easy decision rather than pressing for a finish.

Rocha caught a Cerrone kick and took him to the ground early in the first round, but Cerrone did a nice job of fighting off his back and getting to his feet. In the stand-up department Cerrone was clearly superior, and he was content to keep standing and pepper Rocha with leg kicks. At one point Rocha threw a right kick to the body, and Cerrone caught Rocha's right leg and kicked Rocha's left leg, knocking him down. It was a very impressive first round for Cerrone.

In the second round it was more kicks from Cerrone and more desperate takedown attempts from Rocha. As the round wore on it was clear that Cerrone was the vastly superior fighter, and Rocha had no answer for what Cerrone was bringing. The only question was whether Cerrone would finish the fight.

The win improves Cerrone's record to 15-3. Rocha, who was making his UFC debut, fell to 6-2, and he likely won't be back in the UFC: He showed that he can't compete.