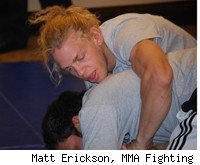 The UFC announced Saturday that verbal agreements are in place for TUF 12 champ Brookins, who won the show at lightweight, to drop down to featherweight to face Erik Koch at UFC Fight Night 25.

The "Battle on the Bayou" show now has three confirmed bouts with Alan Belcher vs. Jason MacDonald and Dongi Yang vs. Court McGee getting announced for the card last month.

Brookins (12-3, 1-0 UFC) has not fought since his unanimous decision victory over Michael Johnson at the TUF 12 Finale in December. The WEC and Bellator veteran was scheduled to face John Makdessi at UFC 129 in April, but had to pull out with an injury. Re-booked for the TUF 13 Finale last Saturday against Jeremy Stephens, he was again forced off the card. Brookins' last loss came at WEC 36 in November 2008 to Jose Aldo a year before Aldo won the featherweight title.

Koch (12-1, 1-0 UFC), who went 3-1 in the WEC prior to its merger with the UFC, has won three straight by first-round stoppage – including consecutive Knockout of the Night bonuses. In March, he knocked out Raphael Assuncao in the first round at UFC 128. His only loss was a unanimous decision setback to Chad Mendes, one of the featherweight division's top contenders for Aldo's title, at WEC 47 in March 2010.

UFC Fight Night 25 is expected to take place at the Ernest N. Morial Convention Center in New Orleans. The main card will air on Spike TV and is the promotion's first of a series of planned annual special events with major sponsor Bud Light.

The UFC has not hosted an event in Louisiana since UFC 37 in May 2002, which was in Bossier City, a suburb of Shreveport. The last UFC event in New Orleans was UFC 27 in September 2000, prior to the Zuffa era.