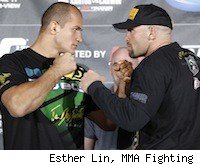 When the UFC recently lost Brock Lesnar to another bout of diverticulitis, it changed the complexion of the heavyweight division, as well as the dynamic of UFC 131. The former UFC champ may be the biggest pay-per-view draw in MMA, but he also has stylistic limitations that were likely to make his proposed match with Junior dos Santos into a grinding battle of attrition rather than a fan-friendly series of explosive exchanges that could force an end in a moment's notice.

While the change from Lesnar to Shane Carwin may impact UFC's bottom line, it may lead to a better in-ring main event. That's because Carwin is much more likely to engage dos Santos at his standup specialty, and because both heavyweights boast the thunderous power to finish each other.

In terms of their fighting bases, dos Santos and Carwin -- both 12-1 -- should not be similar fighters, dos Santos as a jiu-jitsu practitioner and Carwin as a wrestler, but like many heavyweights, both fell in love with the striking game. The heavy fists have resulted in both being regulars in highlight reels. For dos Santos, he has finished eight of his 12 wins by KO or TKO. For Carwin, it's been seven of his 12 wins, while another opponent submitted due to strikes.

More: UFC 131 Fight Card | Watch UFC 131 Live Online | UFC 131 Results
Because of that, it's easy to guess that the two will spend the majority of their bout trading strikes. Or is it?

Fighters are tricky creatures. Most are smart enough to do something other than obvious, even it only means adding in some unforeseen wrinkles to cause confusion. Other times, they throw carefully constructed game plans to the wind, content in putting faith in their ability to improvise. At the highest level, though, that type of mentality has usually long since been weeded out, with experience guiding the athlete into the belief that a plan is something to be followed.

Take Carwin, for instance. While many people look at him and just see a ham-fisted monster who looks capable of knocking down a stop sign with a high five, he's actually one of MMA's best thinking big men. When he faced Frank Mir in March 2010, he strategized a plan to bullrush Mir into the cage, where he knew he could outmuscle him, land short punches and wear him down. As it was happening, Mir thought Carwin was shooting in for a takedown, and when he found himself with his back to the cage, mistakenly believed he had successfully stuffed Carwin.

In a brief moment of lost concentration, Mir congratulated himself on what he thought he had done. Meanwhile, Carwin was systematically moving on to the next stage of his plan, pummeling Mir in the corner. Unprepared for the wily scheme, Mir was quickly in trouble, and inside of four minutes, the fight was over.

Given dos Santos' outstanding technical striking as well as excellent hand speed, it would not be surprising to see Carwin try this same type of approach. The best way to frustrate dos Santos would be to take away his time and space, and frustrate his striking.

It won't be easy to do though. dos Santos has good footwork and he's quick, so Carwin is going to have to disguise his intent before rushing into the clinch or dos Santos will be able to matador his way free.

If the fight stays standing for extended periods, the conventional wisdom seems to be that dos Santos will have the edge. Interestingly though, stats show that Carwin has out-landed opponents in the standup at a higher rate, 55.2 percent to 48.7 percent. Some of that is due to the brevity of Carwin's fights. He's only been out of the first round once, and fighters tend to lose accuracy in the later parts of fights as stamina wanes.

Regardless of the stats, dos Santos is a sharp puncher who finds his target, while Carwin seems to have the power that changes fights in an instant. In this case, the better defensive fighter might be the favorite. In that case, it's clearly dos Santos, who gets hit by only 38 percent of standing punches, a very low number by any division's standards.

If the fight goes to the ground, it's frankly difficult to know what happens. Both men have been submitted once in their respective careers, and have spent most of their ground time on top of their opponent, looking for a TKO finish. dos Santos is a brown belt, while Carwin is a purple. For whatever it's worth, dos Santos looks like the more fluid athlete of the two.

Much of the fight will depend on Carwin's plan. Remember, he hasn't fought in a year and he is at least 20 pounds lighter than he used to be. Even if he tries to grind dos Santos against the fence, he may no longer have the bulk to do it. There are a lot of questions about any fighter coming off such a lengthy layoff, and historically, fighters returning from injury after more than eight months away lose.

dos Santos has few such question marks. Remember, he was already training for Lesnar when his opponent was switched. He had months to prepare for a wrestler, training with UFC studs Mark Munoz and Phil Davis at times, so if Carwin wants to play the wrestling game, he should have a few tricks up his sleeve. But this is still dos Santos' first time against a top wrestler, so it will be trial by fire.

Make no mistake though, this fight will have bursts of standup action, periods that will ultimately decide the bout. Carwin's knockout power is unquestionable, but over the course of 15 minutes, it's hard to think dos Santos' quickness won't pay dividends both offensively and defensively. With two big punchers, anything can happen, but I think dos Santos is on a collision course with Cain Velasquez, and he takes it by decision over a game Carwin.