Kenny Florian's Cut to 145 Pounds a 'Test of Discipline' 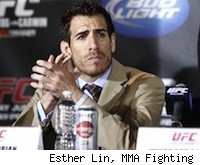 VANCOUVER, British Columbia – As the smell of hot dogs cooking on the street above wafted through Robson Square during Thursday afternoon's press conference, Kenny Florian's face seemed to betray the slightest quiver of agony.

After what he's been through just to get down to yet another weight class in his UFC career, it had to feel like just one more twist of the knife into his empty stomach.

As he made clear during the media workouts the day before, the cut to 145 pounds for the first time in his career requires no small amount of sacrifice and suffering. Fortunately, he's maintained a sense of humor in the face of starvation.

"The skinny jeans I was wearing before, now are big on me," Florian joked on Wednesday. "I've got to get a whole new wardrobe."

After beginning his career as a middleweight, Florian now finds himself just a day away from making his featherweight debut at UFC 131. It will be the fourth weight class he's fought in while under contract with the UFC, but even for his resilient frame, 145 pounds seems like it might be a bit of a stretch.

This cut has been, as Florian put it, "a test of discipline." It required him to start early and adhere strictly to a brand new diet – one with lots of chicken breasts, vegetables, and, tragically, absolutely no pizza.

Whether all the suffering was worth it, we'll find out soon enough.

At Thursday's pre-fight press conference Dana White declined to say whether the winner of Florian's bout with Diego Nunes will get a title shot – "We'll see," the UFC president said, after prodding from a fan – but White did go out of his way to make one thing clear: this is an important fight for both men.

"[Nunes is] a great fighter...16-1. He's just coming off a win over Mike Brown, so this is a big fight for both guys. Obviously this is Kenny's first fight at 145. He wants to win this fight and work his way in the division. If [Nunes] can beat Kenny, it's big."

And while Florian admitted that making 145 pounds has proven much harder than anything he's done as a fighter before, he also swears that the strict diet has paid off in other ways.

"This has been the best training camp by far in my life," he said. "I know that's kind of the quote to say with every fighter, but it truly has been. And I'll be a hundred percent honest and say I didn't expect it to be. I thought I was going to be real low on energy. I thought it was going to be a brutal last month, and the funny thing is I've gotten stronger and better, and in my sparring and my strength and conditioning, I've been killing it. I'm real happy. There's no doubt about it, it has to do with the nutrition. I haven't felt this good preparing for my fights at [1]55, let alone [1]45."

The real moment of truth will come not just at Friday's weigh-in – where Florian hinted that he might further enrage the rabid Vancouver crowd by sporting the black and gold of his hometown Boston Bruins – but also on fight night, when he'll have to prove that he didn't leave his best stuff on the scale in a desperate attempt to make weight.

He wouldn't be the first fighter to cut away some of his strength and explosiveness along with the extra pounds. But thanks to his nutritionist, George Lockhart, Florian said he's on track to make the weight without an excruciating final push.

"The schedule that we're on, we should probably be cutting less weight than I have for my last four or five fights at 155. That's the game plan, anyway. We'll see if we can get there. I'm hoping that we can do it, and I think we can. I think it's going to be less than what I've cut in the past, which is good. At [1]55, you get a little lazy sometimes."

Against Nunes, Florian faces an opponent who has only lost once in seventeen fights, and that via decision. It's certainly not an easy introduction into a new weight class, and if Florian isn't ready, he knows it will be painfully evident.

"I'm expecting a very, very tough fight from Diego Nunes. He's never not given someone a tough fight. His one loss, I thought he played a poor strategy. He could have won that fight. I could be very well going against an undefeated fighter here. He's still 16-1, trains out of one of the best camps in the world, trains alongside Jose Aldo. He's going to be a fast, dangerous striker and a guy who's hard to put away. He's never been finished in his career, so I expect him to be there strong for all fifteen minutes."

As for Florian, his test starts Friday afternoon when he steps on the scales. And Bruins jersey or no, it might not be pretty, he said.

"I don't think I'm going to look too good there, because I'm pretty thin already. But I'll look somewhat like Christian Bale in "The Machinist." There's no doubt about it. I may be coming for that role."