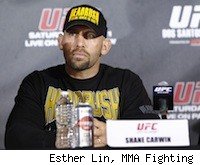 VANCOUVER, British Columbia – Even in the big media push before a fight, Shane Carwin just can't seem to bring himself to speak in sound bytes the way some other fighters do.

Even when he gets a perfect alley-oop pass – for instance, a question from a fan as to whether he sees his fight with Junior dos Santos at UFC 131 going more than one round – his answer comes out sounding a little more press release than pre-fight hype.

He talks about heavyweights throwing hard, yet being physically prepared to go all three rounds – it's an answer that covers the bases and heads off criticism before it starts. It's also a little boring.

Carwin's trainer, Trevor Wittman, has no such problem.

"Carwin by knockout. First round," he says before I can even ask the question.

And it's not because he doesn't respect dos Santos' skills, he clarifies.

"I feel he's the best heavyweight out there," Wittman says, then waits a beat before adding, "Outside of Shane."

For a soft-spoken, media-shy fighter like Carwin who prefers seclusion and a carefully crafted internet presence over getting his name in the news through interviews and public appearances, it doesn't hurt to have a camp that can do some talking for him.

He doesn't particularly enjoy all the fight week media attention, according to his wrestling coach, Leister Bowling, and yet he got a heaping helping of it as soon as he was slotted into the main event at UFC 131.

"I don't think it's a distraction for Shane; I think it pisses him off," says Bowling. "Nothing against reporters, but he hates doing interviews. Shane told me the other day that the thing he hates most about MMA is the fame that comes with it, being at the top. He would rather no one recognize him. He would rather he just got to fight, and got paid to do it."

Though Bowling – himself a three-time All-America wrestler at Dana College – is here to make sure Carwin's grappling and takedown abilities don't atrophy as he relies on his heavy hands, he's also towing the line on the question of whether Carwin will look for the takedown in this fight.

Dos Santos says yes, but the Carwin camp says, don't be so sure.

"I'm sure a lot of people think that. But if Shane's going to use his wrestling in this fight, it's going to be hand-fighting and pummeling and pushing him against the cage and beating him up there, taking his movement and speed away. It doesn't have to be on the ground for him to do that."

At the same time, if you're a Division II national champion wrestler trying to convince people that you aren't even interested in testing a boxing-based opponent's takedown defense, that's going to be a hard sell. Dos Santos sure isn't buying it. He told reporters earlier in the week that he has "a feeling" Carwin will look to put him on his back.

"If I was in his shoes, I'd be thinking the same thing," Wittman says. "He's very confident in his boxing, but when you go out there and out-box people on a consistent basis, you get that realm of, hey, this is what I do and I'm great at it. It's kind of like when you look at the [Anthony Pettis-Clay Guida fight]. Pettis goes out and it looks like he's just looking for one kick. To me, when someone gets into that, thinking he can just out-box everybody, he's overconfident."

For Carwin, one of the biggest questions is still his cardio. After collapsing against Brock Lesnar, then offering up an explanation about lactic acidosis that sounded to many fans like little more than a fancy way of saying 'I gassed out," he spent much of the early part of the week revisiting that loss and the fallout from it.

Sure, he said, there were some "definite long nights," after the loss. Carwin admitted he was so depleted in the second round that Lesnar "probably could have got me in a kneebar if he wanted to."

But like most fighters who suffer a big loss, he pinpointed the issue that he thought was to blame and set up about rectifying it. In Carwin's case, it was his bulk and his diet. He changed both, slimming down and adding the expertise of nutritionist Josh Ford. Now he's lighter and quicker, he says. But is he ready to deal with dos Santos' speed?

Here's where a wrestler might point out that fancy footwork isn't so fancy once a guy's on his back. Here's where he might openly wonder how good dos Santos' boxing is when he's being suffocated against the fence – a "bully" move that Bowling says Carwin has perfected, making life "miserable" for anyone on the business end.

But Carwin? He couldn't play it much closer to the vest. That's why it helps to have guys like Wittman on the team. He'll not only tell you that this one won't last long, he'll do it with an enthusiasm that is downright infectious.

For this particular bout, it's practically coming out of his pores.

"If I were to sit back and say, which fight do we want if we could choose any fight? Which fight would fit us the best, stylistically? It would be this fight," he says. "I couldn't be any more excited."