The Many Questions of UFC 131 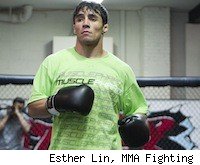 Every mixed martial arts event comes with its own set of storylines, intrigues that make us emotionally invested in what is soon to happen. Some are obvious, others are much more subtle. When a major superstar like Brock Lesnar rebounds from a major illness to return to action, we all know it. But every fighter on the card has his own story.

For whatever reason, UFC 131 seems to have quite a collection of head-scratchers. The event is subtitled Dos Santos vs. Carwin, but it could just as easily have been called UFC 131: Question Mark.

Why? Because there is no shortage of things that make you go, Hmmm. From Jon Olav Einemo's five-year layoff to Kenny Florian fighting in his fourth division to Shane Carwin's weight drop and more, there are plenty of questions to think about.

1. What will Shane Carwin look like after surgery, nearly a year off, and losing over 20 pounds?
Carwin was forced into a long absence due to a procedure that addressed neck, back and nerve problems. Now all healed up and significantly lighter, Carwin may not physically resemble the fighter we got to know over recent years. While it's true that his improved physical health and less weight may add quickness, we also have to wonder if it will affect his power.

Carwin's sledgehammer hands have always been his No. 1 weapon, and so we are left to wonder if they will have the same force of power when he faces Junior dos Santos as they've had for so long. Even a slight decrease could mean the difference, since we all know that dos Santos likes to fight fire with fire.

2. What do we expect from Jon Olav Einemo?
We know Jon Olav Einemo is a 35-year-old Norwegian with incredible grappling skills, but who is he as a fighter today, after so much time away from the sport? He hasn't fought an MMA match since Nov. 2006. His UFC 131 opponent Dave Herman started his career the very next month and has fought 22 times since then.

Einemo's jiu-jitsu is a known quantity, and Herman can't be surprised with anything he does there, but the rest of it is a wild card. For years now, Einemo has been training with the famed Golden Glory fight team, a camp that is notorious for building strikers. In five years, you can learn a lot about the striking game. In Einemo, we might see the rise of a new, well-rounded force, or we could see a guy dusting off a forgotten career. Anything is possible.

3. Will Kenny Florian be able to make 145 and maintain his explosiveness & stamina?
When Florian steps into the cage on Saturday, he will become the first UFC fighter ever to fight in four different weight classes, starting from middleweight and working off the pounds all the way to featherweight.

At 145, speed is at a premium. Diego Nunes has very fast hands, strong leg kicks, and judging from the beating he took from former champ Mike Brown -- fighting him with one eye for two rounds, and winning -- a strong heart and gas tank. From his previous runs as a contender at 155, we know that Florian has the skills to overwhelm lesser opponents, but there has to be a concern about what kind of toll dropping another division will have on his conditioning.

Florian is a consummate professional, and he seemed in good spirits at Wednesday's open workouts, where he said he has about 14 pounds to cut before weigh-ins, but there is a law of diminishing returns with cutting weight, and he's certainly flirting with it.

4. Is Diego Nunes a legitimate contender?
Talk about an under-the-radar contender. Nunes is hardly known by most fans despite a 16-1 record, including wins over top featherweights like Raphael Assuncao and Mike Brown.

The former WEC champion Brown was a fairly big-name opponent for Nunes, but he pales in name recognition to longtime UFC star Kenny Florian. If Nunes can beat Florian on Saturday, he vaults himself forward in a hurry. Everyone likes new contenders, and Nunes would clearly announce himself as such with a definitive win.

5. Chris Weidman ... you again?
Weidman made his UFC debut on short notice against Alessio Sakara in April, and won. Afterward, he said he was going to take some time to let a broken rib heal. Yet now, here he is just three months later, fighting Jesse Bongfeldt. So what gives?

There is something to be said for giving a young fighter time between fights to improve his skills, but in this day and age, when the UFC calls, you have to be ready. Weidman had gone no longer than two weeks of letting his ribs heal when he got the call to replace Bongfeldt's originally scheduled opponent. This time, at least Weidman had a full, eight-week camp, but you have to wonder if his rib sufficiently healed that quickly.

6. Munoz vs. Maia - Grapplers delight or standup war?
One was an All-American wrestler, the other is a decorated submission fighter who has no qualms with fighting from bottom position, so it would probably be quite fascinating if Mark Munoz and Demian Maia spent the whole 15 minutes of their middleweight bout on the ground.

Is that likely though? Probably not. Munoz has the ability to dictate the fight's location, and if he doesn't want to play in Maia's guard, he may simply elect to engage in a standup fight, where he has far more power. But Maia is so terrifying on the ground that most fighters don't even want to play the clinch game with him, for fear of him pulling guard. How will either man approach the other? It should be the most tactically interesting battle of the night.

7. Who is Vagner Rocha?
Not literally, of course. We know he's a 29-year-old jiu-jitsu specialist who has previously fought in Strikeforce and Bellator, but there's not a whole lot of tape out there on him, so it can't be too easy for Donald Cerrone to know what to expect.

Rocha is a black belt under the esteemed grappling wizard Pablo Popovitch, and four of his six career wins are by sub, but Cerrone is usually fairly comfortable playing jiu-jitsu. If he takes Rocha lightly on the ground though, he may find he's a little better than he expected. It's never fun facing unknown commodities, and here's why: this is one of those lose-lose scenarios for Cerrone, who is expected to win, and do so impressively. Anything else will seem like a letdown, regardless of how talented Rocha really is.

8. Mike Massenzio, how bad do you want it?
Really bad, is clearly his answer. Massenzio was cut from the UFC last August after two straight losses. He's fought all of his career as a middleweight, so UFC matchmaker Joe Silva had to be near the end of his little black book when he called Massenzio about not only taking a fight on four days' notice, but moving up a weight class as well.

Massenzio didn't blink, accepting the fight with Krzysztof Soszynski. Wise career move? Well, it got him back into the UFC, didn't it? But we really can't judge if it was smart until Saturday night.

Like so many other UFC 131 storylines, for now, it's just another open-ended question.