In Hockey-Crazed Vancouver, UFC 131 Not Exactly a Hot Ticket 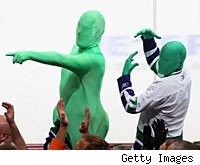 VANCOUVER, British Columbia – In retrospect, the timing could have been better. Or maybe it just couldn't have been worse.

UFC 131 marks the second time in as many years that the world's biggest MMA organization has visited this city, and unfortunately for the UFC, all eyes are not exactly on the Octagon this weekend.

With the Vancouver Canucks tied in a 2-2 Stanley Cup finals series against Boston – and Game 5 headed here on Friday night – Saturday's UFC event seems to be almost an afterthought for most of the city's sports fans.

"It's tough. The UFC couldn't have come to Vancouver on a tougher day, or at a tougher time," says Shawn Tompkins, a Canadian-born MMA trainer now living in Las Vegas.

One of his best lightweights, Sam Stout, is fighting on Saturday's card, but he knows that getting people's attention with anything other than hockey this weekend is no easy sell.

"The fact that it's their hometown team in the Stanley Cup finals? The Stanley Cup, in Canada, is everything," Tompkins adds.

If you don't believe him, just take a quick walk around downtown Vancouver. On the afternoon of Wednesday's Game 4, Canucks flags hang from windows everywhere you look, and fans are already sporting their temporary Canucks tattoos on their faces hours before game time.

And once the puck drops at 5 p.m. local time, you can forget about talking to anyone here about any sport other than hockey.

Take the four fans decked out in Canucks jerseys, waving a Canucks flag and screaming indiscriminately at passing cars on the corner of Hornby and Smithe, for instance. Clearly, these are people who love pro sports – or at least one pro sport. But are they even aware that there's a fight in their town this weekend?

"Who cares about that?" one of them shouts at me when I ask. "Where's your jersey?!"

But to his friend, this sounds familiar.

That's right, I tell him. Shane Carwin. One half of Saturday night's heavyweight main event. He's heard of him?

Inside Earl's restaurant and bar downtown, where a standing-room crowd has gathered to watch the game, the sentiment is the same.

26-year-old Vancouver resident Jamil Sunverji remembers hearing about the fight, but he never considered going, he says. Not with a game in Vancouver on Friday night, and then another on Monday.

"You don't want to waste a night out on that," he says, adding that once he heard the fight card had lost Brock Lesnar from the main event, that's when his interest really waned.

"I pretty much only watch [Georges St. Pierre] and Brock Lesnar," he adds.

"People here only care about hockey," he says, though he isn't exactly wowed by the turnout or fan enthusiasm tonight.

"I'm from Montreal. There, it'd be way crazier, way more people in a place like this. And the girls would be hotter, too."

The lack of interest is reflected in online ticket sales on sites like StubHub.com, where UFC 131 tickets were going for as little as $38 on Thursday morning. According to a report in the Vancouver Sun, that figure is expected to fall even farther as fight night approaches. It makes for a great deal for bargain-seeking sports fans, and somehow, several of the people I talk to in Earl's during Game 4 know only one thing about the fights, and it's that tickets are suddenly cheap.

"All I heard is that tickets are going for below face value," offers one man, who says he still won't buy them because he'd probably just end up spending twice that in beer and food at the venue.

Not that anyone seems to be thinking about their bar tab at the moment, however.

As the Boston Bruins go up by two goals, then three and then four, the once jovial mood in Earl's sours. The vuvuzelas stop blowing, and the drinking goes from fun to angry, with shots replacing beers. Still, few people are headed for the door midway through the third period.

"It's hockey," says Sunverji. "You can score three or four goals in a couple of minutes."

The Canucks don't, however. They score none, and late in the game the only excitement comes when the game turns more violent than usual. Players drop their gloves and sticks and take their frustrations out on one another, and the crowd here – which ironically has professed little interest in the type of professional fighting that doesn't happen on ice skates – suddenly comes to life.

The enthusiasm is short-lived, and the bar begins emptying out as soon as the game ends. The series comes returns here on Friday night for a pivotal game five. Good luck trying to interest that crowd in coming back the next night for several hours worth of fights.

But then, there's not much the UFC can do about it now. It's bad luck, and bad timing, but all it can do is make the best of it.

Tompkins knows all about it, since he and Stout will be hosting an anti-bullying awareness event at the Vancouver Players Chophouse on Friday night, trying to use a mixed crowd of MMA personalities and NHL players to draw attention to their cause. If they can generate interest on the day of the game, he reasons, the UFC will make do with whatever local attention it can get.

"It's a tough time for them to come, but I'm sure the UFC will persevere," he says. "We've got some great Canadian fighters on the card. At the end of the day, UFC fans are UFC fans, whatever else is going on."