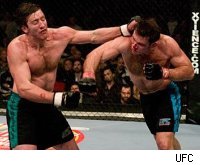 In a blockbuster development, the UFC is in talks to buy an ownership stake in the G4 cable channel, according to published reports.

On Wednesday, New York Times TV reporter Brian Stelter tweeted that a source had confirmed that "Comcast is meeting with UFC today about possible sale of a stake in G4." Meanwhile, The Wall Street Journal furthered the developing story, saying the UFC is in discussions to "buy control" of the network.

In recent days, sources who spoke on the condition of anonymity told MMA Fighting that Spike, which has been the home of the UFC since 2005, is essentially preparing for life without UFC, and that it will move the Bellator promotion on to the channel in 2012.

For the last several days, the internal belief within Spike had been that G4 would ultimately become the UFC's home for The Ultimate Fighter and other broadcast events. The scope of the deal, and that cable channel ownership was in the works, comes as something of a surprise, even though in the past UFC president Dana White has spoken of the possibility.

G4 is currently owned by Comcast, the parent company of UFC television partner Versus.

While nothing is close to final, Spike is no longer aggressively seeking to renew its deal with UFC, practically ensuring that the promotion will find a new home for its Ultimate Fighter series, along with other UFC programming.

Several Spike employees are openly referring to the upcoming season of The Ultimate Fighter as "the last season," and as MMA Fighting reported recently, Spike executives have been on site at recent Bellator events, familiarizing themselves with the promotion. According to a source, it's likely that Bellator will return to weekday events, possibly on Thursdays, so as not to directly compete with UFC. Bellator's current broadcast deal is with MTV2, which like Spike, is owned by the media conglomerate Viacom.

Even if the UFC buys control of G4, it will have some work to do to build up the struggling network, which is available in just 59 million homes. By contrast, Spike is available in 99 million. At the end of 2010, G4 was removed off DirecTV, a move that could be reversed given the UFC's strength as TV's premier pay-per-view provider, a business that directly benefits DirecTV.

Barring what now seems like an unlikely and costly contract extension, the UFC's deal with Spike will come to an end in 2011.