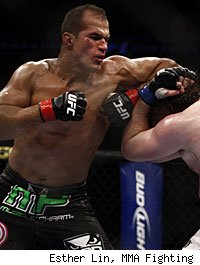 UFC 131 was planned as a pay-per-view that Brock Lesnar would carry: Lesnar, the UFC's biggest pay-per-view draw, would coach against Junior dos Santos on The Ultimate Fighter all spring, then fight dos Santos in a heavyweight No. 1 contender bout in the summer. It would be a very big deal.

Instead, Lesnar got sick with diverticulitis, and the UFC had to scramble to put Shane Carwin in with dos Santos. Carwin is a fine replacement, but the bottom line is that without Lesnar, this pay-per-view is one only the hard-core fans will buy.

When: Saturday, the pay-per-view broadcast starts at 9 PM ET

Junior Dos Santos vs. Shane Carwin
Although dos Santos-Carwin is nowhere near as big a draw as dos Santos-Lesnar would have been, you can make a case that it's a better fight. I thought Lesnar's suspect chin would have allowed a hard puncher like dos Santos to make short work of him, but I think Carwin has the potential to stand and trade with dos Santos and actually get the better end of an exchange of punches.

The questions about Carwin are mostly about his health and fitness. He's been out with a back injury since losing to Lesnar almost a year ago, and the Lesnar fight exposed serious problems with Carwin's cardio. We don't know what kind of shape Carwin will be in for this fight.

For dos Santos, the questions are whether he can take a punch from the one UFC heavyweight who might hit even harder than he does, and whether he'll be able to stop a bigger, stronger wrestler like Carwin from taking him down and controlling him from the top.

I think this fight is basically a toss-up, and a quick knockout in either direction is entirely possible -- and largely unpredictable. But if the fight lasts more than a couple minutes I'll give dos Santos a slight advantage based on his better conditioning and more technically proficient striking, and I'll pick him to win.
Pick: Dos Santos

Kenny Florian vs. Diego Nunes
Florian, who debuted in the UFC as a middleweight, has moved down three weight classes in six years and is now making his featherweight debut. If Florian can make the cut to 145 pounds without weakening himself too severely, he could be a real force in the featherweight class. The UFC would love to see that, as a fight between Florian and Jose Aldo is the biggest featherweight fight the promotion could put together.

Nunes is 16-1 and coming off the biggest win of his career, having beaten former featherweight champion Mike Brown at UFC 125. He's well rounded and still improving, and he could be a handful for Florian. But I see Florian out-striking Nunes in the early going, getting him to the ground as the fight wears on and eventually winning by submission.
Pick: Florian

Jon Olav Einemo vs. Dave Herman
I'm sure the majority of fans have never heard of either of these guys, but Einemo vs. Herman is not a bad fight. Einemo hasn't fought in almost five years, but if he's healthy and ready to go his ground game is among the best in the heavyweight division. Herman is a 26-year-old with a 20-2 record and has been very successful fighting in Japan and in Bellator, EliteXC and other American promotions. There's no way to know how ready Einemo is to return, but I'm going to pick Herman based on having youth and recent success on his side.
Pick: Herman

Demian Maia vs. Mark Muñoz
This is a good stylistic matchup between the fighter who may be the best pure grappler in the middleweight division, and the fighter who may be the best pure wrestler in the middleweight division: Maia is a former ADCC grappling champ, while Munoz is a former NCAA wrestling champ. Munoz needed less than a minute to knock out C.B. Dollaway in March, showing off some solid striking that could test Maia's chin, but I think the most likely result is Maia catching Munoz in a submission and forcing him to tap.
Pick: Maia

Donald Cerrone vs. Vagner Rocha
Rocha has fought on Bellator and Strikeforce undercards, but he's taking an enormous step up into the UFC. I don't think he's ready for a fighter of Cerrone's caliber, and I expect Cerrone to make short work of Rocha.
Pick: Cerrone