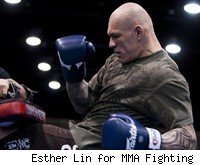 Dana White has many refrains and catch phrases. At this point, fans might as well tag "business as usual" on to the UFC's recent partnership with Facebook. White has said repeatedly he believes the future of television is on the Internet, and he seems intent on proving that.

Once again Saturday, the UFC will stream fights from its preliminary card on its Facebook fan page, allowing fans to see for free bouts that six months ago, they would have had to pay for the next day at UFC.com or wait to see when the DVD was released.

UFC 131: dos Santos vs. Carwin, from the Rogers Arena in Vancouver, British Columbia, Canada, will feature five fights on Facebook. Those bouts will lead into a pair of prelims televised live on Spike TV, which in turn leads into the pay-per-view card. The UFC's event page for Saturday's card listed the details on Tuesday.

This will be the 10th consecutive event the UFC will have utilized the popular social networking site to air bouts that previously would have been unaired. And for the fourth straight event, fans can now see each fight on the card if they watch the Facebook stream, Spike-televised prelims and the pay-per-view.

The Facebook stream will open with a featherweight bout between Darren Elkins and Michihiro Omigawa, Elkins' debut at the new weight class after dropping down from lightweight. Joey Beltran, fighting for the first time since a loss to Pat Barry at the UFC's Fight for the Troops 2 show in January, faces Aaron Rosa in a heavyweight bout. Rosa makes his UFC debut, filling in for Dave Herman, who will fight Jon Olav Einemo – who was scheduled to face Shane Carwin, who got moved up to fight Junior dos Santos when Brock Lesnar went on the shelf. Dustin Poirier meets promotional newcomer Jason Young in a featherweight bout, Nick Ring meets newcomer James Head at middleweight, and likely capping off the Facebook portion of the prelims, Krzysztof Soszynski takes on Mike Massenzio in a light heavyweight contest. Massenzio stepped in just this week for an injured Igor Pokrajac.

To gain access to the fights, which will begin at 5:50 p.m. Eastern, viewers must "like" the UFC on Facebook. As of Tuesday afternoon morning, the UFC has more than 5.6 million fans at the site.

The UFC began streaming preliminary fights in January with its Fight for the Troops 2 show at Fort Hood, Texas. Since then, the promotion has included free Facebook fights for each event, regardless of the main card's platform – be it on pay-per-view, Spike or the Versus cable station. For the historic UFC 129 card in Toronto in April, five prelims were aired on Facebook, followed by a pair on Spike leading into the pay-per-view – meaning for the first time, fans were guaranteed the opportunity to see each fight on the card. That continued for UFC 130 with three Facebook prelims, a pair of Spike prelims and a five-bout main card pay-per-view, and Saturday's TUF 13 Finale.

The main card for UFC 131 features a main event heavyweight contenders fight between dos Santos and Carwin. The winner is expected to face champion Cain Velasquez for the heavyweight title, perhaps at UFC 136 on Oct. 8 in Houston. The main card features three fighters making their UFC debuts. Brazilian Vagner Rocha takes on Donald Cerrone, and heavyweights Olav Einemo and Herman both also debut.