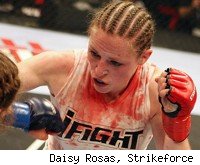 Sources with knowledge of the situation confirmed that a bout pitting former champion Sarah Kaufman against Liz Carmouche is in the works, and has been verbally agreed to.

The 25-year-old Kaufman hasn't fought in Strikeforce since losing the belt to Marloes Coenen back in October 2010. Afterward, she took a fight in a Canadian promotion to stay active, defeating Megumi Yabushita via TKO.

Carmouche, meanwhile, is coming off a strong performance in her first real time in the Strikeforce spotlight. Though she ultimately lost in the fourth round due to a triangle submission, Carmouche dominated champ Coenen for most of their title bout in March. Had Carmouche won, it would have been considered one of the biggest upsets in women's MMA history. Though Carmouche came in undefeated at 5-0 and had won her only prior Strikeforce fight, she had taken the fight on short notice, replacing the injured Miesha Tate. She had less than two weeks to prepare for the fight.

Strikeforce Challengers 17 will be the promotion's first-ever event in Las Vegas. It takes place at The Pearl at The Palms. Strikeforce just announced the event last week, and so far only one other fight is known, the main event matching Roger Bowling against Bobby Voelker in the rubber match of their trilogy.