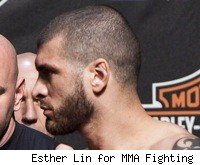 Mike Massenzio has agreed to step in on less than one week's notice against Krzysztof Soszynski at UFC 131, officials announced late Monday night.

The opportunity presented itself for Massenzio, who was released from the organization in August after losing his second fight in a row, after Igor Pokrajac was withdrew from his fight against Soszynski due to an undisclosed injury.

This marks the third opponent Soszynski has been forced to prepare for, as he was originally scheduled to meet Anthony Perosh before an injury sidelined the Australian.

Massenzio, who usually fights at middleweight, has agreed to meet Soszynski at light heavyweight. The New Jersey-native is 1-0 since leaving the UFC.