Martin Kampmann Out, Matt Brown Meets John Howard at UFC on Versus 4 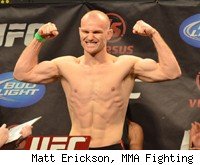 The UFC's Pittsburgh debut got another shakeup overnight.

The UFC announced late Monday that Martin Kampmann has stepped out of his UFC on Versus 4 fight against John Howard with an injury. To compensate, Matt Brown moves up the card to face Howard, and Brown's original opponent, Rich Attonito, will now face Daniel Roberts. The UFC did not disclose the nature of Kampmann's injury.

Just last week, the card's main event, between Anthony Johnson and Nate Marquardt, had to change when Johnson pulled out with an injury. Marquardt, dropping from middleweight to make his welterweight debut, now faces Rick Story, who just 10 days ago upset Thiago Alves at UFC 130.

UFC on Versus 4 takes place at the Consol Energy Center in Pittsburgh on June 26. The main card airs live on the Versus cable channel, part of a four-fight deal the UFC has with Versus for 2011. Versus previously was the home of the WEC, which was folded into the UFC at the start of this year.

Kampmann was looking to get back in the win column after a pair of decision losses – both controversial – to Jake Shields and Diego Sanchez. Shields beat Kampmann by split decision at UFC 121 last October to get a shot at Georges St-Pierre's welterweight title. In March, at UFC on Versus 3, Kampmann lost a unanimous decision to Diego Sanchez – though many believe Kampmann won the fight, and FightMetric's stats indicate Kampmann did more damage.

Brown has lost three straight, all by submission, to Ricardo Almeida, Chris Lytle and Brian Foster. Howard has lost two in a row, to Jake Ellenberger and Alves, after a 4-0 start to his UFC career.

Attonito also drops down from middleweight to welterweight for the first time. He is coming off a loss to Dave Branch at the TUF 12 Finale in December. Roberts had his three-fight streak stopped by Claude Patrick at UFC 129 in April.

"I feel I'm finally down at the weight class I should have been the entire time," Attonito said in a release from his management company. "I feel better than I've ever felt physically and athletically."

With just four bouts on the main card on Versus, the event will tie a UFC record for most preliminary card fights on one show with eight. UFC 103, in September 2009, was the first card in the promotion's history with 13 fights – eight of which were prelims. That was also the first time a pair of prelims aired live on Spike TV.

Though not yet announced by the UFC, some of all of the UFC on Versus 4 prelims could wind up on Facebook. All of the UFC's events since January's Fight for the Troops 2 show have included preliminary fights streaming for free on the social networking site. Including this Saturday's UFC 131 pay-per-view, the last four have aired each fight on the card with a combination of Facebook, Spike and pay-per-views.