Gina Carano Not Medically Cleared, Out of June 18 Strikeforce Return 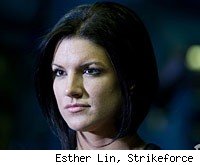 Gina Carano will have to wait a little longer to make her return to the cage.

Strikeforce CEO Scott Coker announced Tuesday afternoon to open a media conference call that Carano will not be fighting on June 18 against Sarah D'Alelio. Coker said Carano did not receive medical clearance from her doctor.

"I'm disappointed not to be fighting June 18. I'd like to thank (coach and trainer) Greg Jackson ... and I hope this is just a brief setback," Carano said in a prepared statement read by Coker.

Carano's return was scheduled for the main card of Strikeforce: Overeem vs. Werdum, which airs on Showtime and features the second two quarterfinal fights of the promotion's heavyweight tournament.

Coker said the promotion did not have any additional details yet for the reason Carano was not cleared to fight. He said a lightweight top contenders fight between KJ Noons and Jorge Masvidal, originally scheduled to air on HDNet as part of the prelims, will be elevated to the main card, which airs on Showtime.

"I know she's really disappointed. We talked to her representatives," Coker said. "It's an unfortunate situation, and we'll be moving forward with the KJ Noons-(Masvidal) fight. We just don't have any other further information on Gina."

Coker said D'Alelio does not yet have a new opponent for the Dallas card and was unsure if she would still fight on the show. He said he hoped a decision would be made on D'Alelio's spot on the card by the end of Tuesday.

Carano (7-1, 1-1 Strikeforce), a Dallas area native, was to make her return to the cage for the first time since a loss in August 2009 to Cristiane "Cyborg" Santos in a Strikeforce women's middleweight title fight. She has been out of fighting action while pursuing a film career, including a role in "Haywire," a film directed by Oscar winner Steven Soderbergh, scheduled for release later this year.

On Saturday, Coker told MMA Fighting in Las Vegas prior to the UFC's TUF 13 Finale that despite Carano's movie future, he believes she still has the drive to continue fighting, as well.

"Gina has a successful career in film now," Coker said. "She's done this Steven Soderbergh movie, and I heard it's been getting great reviews. They're feeling this could really launch her film career. What I respect about Gina is, she's a fighter at heart. This is something she wants to do."

But Coker also said Carano's layoff of nearly two years could be a factor – and told MMA Fighting he believed she likely was thinking about possible cage rust.

Though the heavyweight tournament should be sufficient to draw viewers to Showtime, Coker told MMA Fighting on Saturday having Carano on the card was being looked at as a solid opportunity to bolster the ratings.

"It's going to be a great event because Gina, let's face it, had the highest rated Showtime event for two years or something like that," Coker said. "The (Fedor vs. Silva) event in New Jersey beat that, but that was the heavyweight tournament. Gina and Cyborg held the rating. Showtime loves her, the media loves her – she's got that X factor. And she's on her way to a film career."

Coker said despite the long layoff for the 29-year-old who was christened as "the face of women's MMA" several years ago, he didn't believe Carano wanted to come back and just fight sporadically. He said he envisioned Carano returning so she could challenge for a title again.

"I respect she doesn't want to fight once," Coker said. "She wants to fight in the fall, next year ... she has this game plan in her mind and fighting's important to her. Let's see how far she can take it. She wants to come back, and the game plan depends on how she does in the first couple fights. But you have that fight in you, you've got that dog in you – you want to fight. She has that in her. She's going to continue to do (films and fighting)."