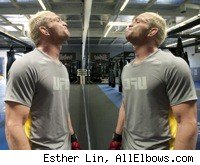 Prior to last week's announcement that Jason "Mayhem" Miller would be a coach opposite Michael Bisping on the 14th season of The Ultimate Fighter, MMA Fighting's E. Casey Leydon spent an entire day with the MTV star, which included an intense training session with some of MMA's biggest stars at the Reign Training Center in California.

Check out the exclusive video below.