Strikeforce Grand Prix Semifinals Likely in Early Fall, Finals Could Be on PPV 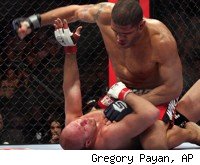 It's been a wild ride for the Strikeforce promotion over the last few months, launching a Heavyweight Grand Prix to strong fanfare, then getting sold off to UFC parent company Zuffa, and now finding their way in a brave new MMA world.

On June 18 in Dallas, the promotion will present the second set of Grand Prix quarterfinals, finally completing the first round that began back in February. And according to company general manager Scott Coker, after the completion of this set of matches, Strikeforce hopes to host the tournament semifinals sometime in the early fall.

That will come as good news to Antonio "Bigfoot" Silva and Sergei Kharitonov, who have been awaiting the date of their next matchups since beating Fedor Emelianenko and Andrei Arlovski, respectively, on Feb. 12.

According to Strikeforce bracketing, Silva will meet the winner of June 18's Alistair Overeem vs. Fabricio Werdum match, while Kharitonov will face the Josh Barnett vs. Brett Rogers victor from the same night.

While Strikeforce originally hoped to complete the tournament by the end of 2011, on Tuesday, Coker acknowledged that due to ongoing issues, that might not be possible, though they still hoped to pull it off.

"That was the original plan, but if it carries over into 2012 and we can finish it in a calendar year, that's sufficient," he said.

Last weekend, Coker told MMA Fighting's Matt Erickson that the promotion pushed the semis back for practical reasons, and that they are still considering the possibility of broadcasting the finals on pay-per-view.

"We were originally going to have (the semifinals) in August, but we felt like it's too close to the June fight," he said. "So it'll be sometime in the early fall. And then the finals will be the beginning of next year. We had a conversation with the fight team and Showtime, and they were fine with it. [Doing the finals as a pay-per-view is] the dialogue – there's definitely a good possibility. But it's not been decided yet."