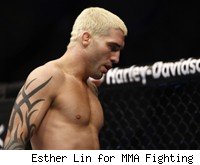 Kurt Pellegrino surprised many when he announced last week on his website that he was stepping away from MMA, effectively retiring as a fighter. But to those closest to him, it likely didn't come as a surprise at all.

"I've been thinking about retirement since (fighting) Josh Neer (at UFC 101 in August 2009)," Pellegrino told host Ariel Helwani on Monday's edition of "The MMA Hour." "I've been talking to my wife about it since then, anyway. When it was time to do it, I just said, 'Do it now.'"

Pellegrino said he wrote the post on his site, published it, and tried to not look back.

"I wrote this thing all out and pressed send," Pellegrino recalled. "I left my house and drove around for a bit. That was how I dealt with it, because it was a hard thing to do. Do I want to fight again? Right now, I kind of don't."

His initial statement about stepping away left room to return. But Pellegrino (16-6, 7-5 UFC) said Monday it's not likely, and cited missing key moments with his family during his fighting career as a key reason he's liable to keep the gloves on a hanger.

"I'm really happy where I'm at right now in my life. I have no regrets with my decision," Pellegrino said. "Being away, I missed so much of my daughter's life when she was a girl, when she was a baby ... you miss those little things. I probably fed my daughter with a bottle I don't think even 20 times. I felt like a really bad father. A lot of guys that fight I think care a lot more about traveling and being away from their families than being with them. And I'd rather be with them."

Pellegrino and his wife also have a new baby boy to go with their daughter.

Pellegrino was on a four-fight winning streak in the UFC before dropping a unanimous decision to George Sotiropoulos at UFC 116 last July. He followed that with a split decision loss to Gleison Tibau in his home state of New Jersey at UFC 128 in March. During his four-fight streak, he won UFC bonuses for a Fight of the Night against Thiago Tavares at UFC 88 and Submission of the Night against Fabricio Camoes at UFC 111 – and in that fight, he also injured his knee. But he trained anyway, refusing to pull out of his fight with Sotiropoulos just over three months later.

But for that fight, Pellegrino said the doubts about his future in the sport began to enter his mind. "In my mind, I didn't care if I got my hand raised," Pellegrino said. "When that started happening, I didn't want to be a part of the sport anymore. If I was 100 percent Kurt, I would've been able to beat (Sotiropoulos)."

Pellegrino said the UFC, specifically matchmaker Joe Silva, understood his position and released him from his contract. He also said Silva sensed it might be coming at his last fight against Tibau, and Pellegrino let his wife in on it at that time, too.

"Talking with Joe, he said, 'I don't see the fire in you, buddy,'" Pellegrino recalled. "My wife, I told her before the weigh-ins, 'I don't wanna do this no more.' Thirteen years I've been with my wife, and it's been 13 years of Kurt Pellegrino. It's time to be a part of their lives a little bit, too."

For now, Pellegrino said he will stay plenty busy with the school he runs, where he teaches all the jiu-jitsu classes. And he said every Tuesday and Thursday, he'll be home to be with his kids while his wife runs the spray-tan business he purchased for her.

But regrets? Pellegrino said he won't have any – yet.

"I told my father and wife when I was 30, I'd never, ever compete again," said Pellegrino, who is now 32. "I've been wrestling since I was 5 years old. I've been cutting weight since I was 12. I got to (fight in the UFC) 12 times and win Fight of the Night honors. ... Most (fighters) live and die just for the life – I could care less.

"This is the right choice for my life right now. I kind of need to go find myself a little bit."