Renzo Says a Gracie Should Fight in Rio, but It Won't Be Him 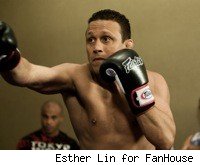 The UFC's August fight card in Rio de Janeiro is just about set, but one question remains: Will anyone from the first family of Brazilian jiu jitsu be a part of it?

One member of that family, Renzo Gracie, says he feels strongly that a Gracie should be a part of the event. But Renzo says it won't be him, because he simply hasn't had time to prepare for an MMA fight with all the work it takes to run his own jiu jitsu school.

"In reality, I can't," Gracie said on The MMA Hour. "I have no time now. I was planning to, I began the training, but my life is so crazy I couldn't dedicate 100 percent to that."

Gracie said he would love to see his cousin Royce Gracie, the first UFC champion, fight on the UFC 134 card. And if not Royce, Renzo thinks someone named Gracie should be in the Octagon representing the family.

"I hope Royce fights," Renzo said. "To have a Gracie fight there would be great -- great for the fans, to have someone from my family fighting. I hoped to do it but I don't have the time to concentrate to it."

Renzo said his next competition will be an Abu Dhabi Combat Club grappling match with Mario Sperry, and then he'll begin preparing for another UFC fight.

"For sure, I'll be fighting," Renzo said. "I would fight for free anywhere. That's how much I like this. The UFC is paying me, so how could I say no, but that's the reality. ... I love the sport so much."

Renzo, who last fought against former welterweight champion Matt Hughes in April of 2010, said that when he does fight again he'll move down to lightweight. He also said that he's sure he'll continue to fight in the UFC and not move to another promotion, because of his respect for UFC President Dana White.

"It's great," Renzo said of the UFC. "I love Dana. I've known Dana since before he was the UFC president and I've always had a great relationship with him."

According to Renzo, the fighting future of the Gracie family is bright and includes his own 16-year-old son, whom Renzo expects to see fighting in the UFC some day. Renzo said his son is a passionate student of jiu jitsu, and Renzo would love to see his son turn his attention full-time to jiu jitsu and MMA right now, but his wife insists that their son finish school first.

So we can rule out Renzo and his son UFC 134. But Renzo is still holding out hope that the UFC Rio card will include a Gracie.