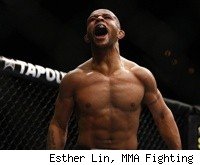 Demetrious "Mighty Mouse" Johnson is the next big thing in the bantamweight division in mixed martial arts. Or maybe the next little thing.

Johnson is small even by bantamweight standards (if the UFC ever adds a 125-pound flyweight class, he'll probably join it), but he showed once again in his UFC 130 victory over Miguel Torres that he has strong enough wrestling that he can take down bigger opponents, keep them down, and grind out decisions. And Johnson is so quick moving in and out that he has managed to avoid the "boring" label that's too often fastened to fighters who rely on their wrestling like that.

There's no telling how far the 24-year-old Johnson can go, but he's already come a long way: See just how high he is on the bantamweight board below.

(Number in parentheses is the fighter's rank in the last bantamweight list.)

1. Dominick Cruz (1): The champion is now less than a month away from his long-awaited rematch with Urijah Faber at UFC 132. In that fight, Faber retained the WEC featherweight title and handed Cruz the only loss of his career. This time Cruz is the champion, and the favorite.

2. Urijah Faber (2): Faber beat Cruz handily last time, but the big question is whether he's as good a fighter now as he was then. The 32-year-old Faber has looked like he's slowing down in the last couple of years, while the 25-year-old Cruz is still improving. It's a tough fight to call.

3. Joseph Benavidez (3): His fight with Eddie Wineland in August in Milwaukee will be a good challenge for Benavidez, who is 14-2 in his MMA career, with both losses coming by decision against Cruz.

4. Brian Bowles (4): The Cruz-Faber main event isn't the only big bantamweight fight at UFC 132: Bowles fights Takeya Mizugaki on the undercard. A Bowles win could set him up for the next shot at the Cruz-Faber winner.

5. Demetrious Johnson (NR): The UFC really ought to give Johnson a pay raise. Earning $6,000 to show and a $6,000 bonus for winning just isn't enough for a fighter who's in the Top 5 of his weight class. Johnson isn't a big draw now, but he looks like a future title contender, and a long-term contract extension would seem to make sense for both the UFC and Johnson.

6. Scott Jorgensen (6): Jorgensen showed off some very impressive ground and pound against Ken Stone at the Ultimate Fighter Finale, with a brutal right hand to Stone's chin from inside Stone's guard, knocking him cold. Jorgensen was outclassed by Cruz when they fought for the bantamweight title in December, and I wouldn't give him much of a chance in a rematch, but he's a threat to anyone else in the division.

7. Miguel Torres (5): It's tough to see the way Torres has fallen: He's lost three of his last five after starting his career 37-1. Torres still has plenty of good fights left in him, but it's probably not realistic to think he'll ever get the bantamweight title back.

8. Brad Pickett (NR): Pickett was supposed to fight Torres at UFC 130, but an injury forced him out of the fight and Johnson took his spot. Pickett beat Johnson in April of 2010, and you could make an argument that he deserves to be ranked higher than Johnson because of that, but I have Johnson ahead of Pickett based on how much Johnson looks like he's improved in the last 14 months.

9. Eddie Wineland (8): Wineland lost to Faber in March but gave him a much tougher fight than most people expected, and now he's got a big fight with Benavidez in August. Wineland has been around a long time (he was the first WEC featherweight champion), and sometimes that makes people forget that he's only 26 years old and is still getting better.

10. Renan Barão (9): Barao's unanimous decision victory over Cole Escovedo at UFC 130 runs his incredible streak to 26 straight wins (with one no contest mixed in). It's time to see how Barao does against Top 10 competition.