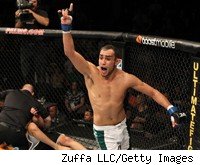 I've always wondered what Ultimate Fighter winners do with their cut-glass trophies. It looks like something you might get for being the most improved player on a high school water polo team, so I'd be surprised if too many recipients have it displayed prominently in their homes.

I keep expecting to see one show up on Ebay, but then who would buy it? I have no idea, but maybe Tony Ferguson will get a chance to find out. He's our latest reality show winner, joining a diverse group that has had wildly varied post-grad results.

So what does Ferguson's win mean, and how far has Anthony Pettis fallen after putting his title shot on the line against Clay Guida? The answers to those questions and more await you, as we sort through the biggest winners, losers, and everything in between after the TUF 13 Finale.

Biggest Winner: Clay Guida
Any lightweight who has ever considered a strategy that involves tiring Guida out only needs to look at him bouncing around in the post-fight interview after three hard rounds to know what a bad idea that is. Against Pettis, Guida showed that a non-stop motor and a wealth of quality experience to draw upon is sometimes all you need to get your hand raised. The decision victory was Guida's 29th win and his 40th pro fight overall. Even Guida would probably agree that Jim Miller deserves to be ahead of him in line for a crack at the belt, but "The Carpenter" is definitely in the conversation now. What he lacks in sheer talent, he makes up for with work ethic and a willingness to get right in your face and stay there all night. How can you not root for a guy like that?

Biggest Loser: Anthony Pettis
Pettis gets this distinction less for his performance than for what it cost him. He didn't fight poorly, but all it took was fifteen minutes on a Saturday night for him to go from number one contender to the middle of a crowded pack. Not that it needs to be anything more than a minor setback in the long run. He's young and has a lot of potential, but Guida showed us all that there are some holes in his game. Some of that is just inexperience. He caught a big break in the third round, yet couldn't capitalize on it. It's also possible that he's trying to force those crowd-pleasing kicks a little too much, which resulted in more interesting misses than useful hits against Guida. He lost his title shot with the defeat, but it's not the end of the world. If he uses it as a learning experience, this will be nothing more than a speed bump in a promising career.

Best Prospect: Tony Ferguson
He can wrestle and he can swat – a combination that makes him a man to be taken seriously. If we've learned anything from 13 seasons of TUF, however, it's that winning the show is not quite the career-crowning achievement it's made out to be. What it is, is a nice start for Ferguson and a chance to develop in the UFC with a little more slack than most new hires get. That's why I wouldn't recommend calling out guys like Amir Sadollah. While there are benefits to being proactive about matchmaking, the TUF winner usually gets to ease into the big time a little more gently. I don't want to say he should expect an easy fight in his first post-TUF appearance. There aren't many of those to be found in the UFC. But there are easier fights out there, and with them, a chance to get comfortable in the Octagon. Just because you're a reality TV hero, it doesn't mean the roads are all paved with gold now. Just ask Efrain Escudero.

Least Certain Future: Ramsey Nijem
He looked great on TUF, but all it took was one lunging left hook from Ferguson to stiffen him up like stale toast. He's obviously got talent, but he also seems like he might not be quite ready for the UFC just yet. He's now 4-2 in his career, and his most high profile wins were reality show exhibition bouts. He might still turn into a legitimate UFC fighter, but he'd better do it soon. It doesn't take much to go from TUF finalist to TUF footnote. Just ask Kris McCray. And Vinny Magalhaes. And Luke Cummo. And...you know what? I think you get it.

Biggest Win Under Dire Circumstances: Ed Herman
After losing three of his last four and sitting out with a recurring knee injury for nearly two years, Herman was desperate for a big victory. Knocking out a tough opponent like Tim Credeur in less than a minute is a good way to get back on the map. Herman should consider it a temporary stay, and one possibly aided by the fact that Credeur had been out of action nearly as long as he had. Now Herman has to hope that he's more successful in his comeback than he was before his initial injury.

Most Disturbing Trend: Ken Stone's recent KO's
He was on the business end of a brutal slam knockout back in December, then got pounded out by Scott Jorgensen in the first round on Saturday night. Two scary knockouts in a row – all in a six-month span – is never good for your career prospects, but it's even worse for your brain. While we still don't know a ton about knockouts and long-term brain health, we do know that it's a bad sign when a fighter keeps ending bouts asleep on the mat, especially when the knockouts start to come easier and easier. Maybe Stone could take some time off and reevaluate. Even if he doesn't want to, it's quite possible that the Zuffa contract axe will do it for him.

Most in Need of a Step Up in Competition: Kyle Kingsbury
The decision over Maldonado was his fourth straight victory in the UFC. Now that his skills have caught up to his size and natural athleticism, he seems like a guy who might actually go places in the light heavyweight division. It's hard to know for sure though, since the UFC keeps giving him opponents who are all at roughly the same level. Jared Hamman, Ricardo Romero, Fabio Maldonado – all are tough guys, but it's not exactly a steady climb in quality of competition. Now's the time to throw Kingsbury into the deep water and find out if he can swim.

Least Convincing Effort: Josh Grispi
It's strange to think that not so long ago, this guy was considered a credible challenger for Jose Aldo's title. The fighter who showed up to face George Roop on Saturday looked like a man who would have preferred to be almost anywhere else. It's never a good sign when your cornermen are all but begging you not to quit between rounds. He made it into the third, but just barely, and he didn't need much encouragement to crumble up and collapse after Roop hammered him with a body shot. Any fighter is going to have his good nights and bad nights, but Grispi has fallen off hard lately. Might be time to sit down with his coaches and talk about what he's really trying to accomplish here.