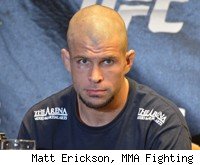 LAS VEGAS – Several times during Season 13 of "The Ultimate Fighter," it didn't look like Chris Cope was having much fun.

After all, it's hard to have a good time when nearly all your roommates think you're plotting and scheming against them. Termed a "double agent" by his teammates, who believed he was giving training secrets to the opposition, Cope surprised many by reaching the semifinals of the welterweight tournament.

On Saturday, after a dominant decision win over friend and housemate Chuck O'Neil at the TUF 13 Finale, Cope said he just wants to have fun. And the yells of his TUF calling card "Wooooo!" he gave out several times during the fight were plenty indication of that.

"This whole experience is supposed to be fun," Cope said after his 30-27 sweep of fellow semifinalist O'Neil to open the main card Spike broadcast. "That's why we all do this. When I go out there, I'm trying to have as much possible."

Winning certainly helps, even if it came at the expense of his best friend in the TUF house. Cope said he and O'Neil kept in touch after the show finished taping earlier this spring – until they calls from matchmaker Joe Silva telling them they'd be on the finale against each other.

"t was a hard thing – me and Chuck are friends," Cope said. "He was one of the few people I kept in contact with when the show ended. We were texting back and forth, and then one day we got a call from Joe Silva, who said, 'Hey, I've got good news: You're going to be fighting your buddy, Chuck O'Neil.' And then the texts and the phone calls stopped. It was a weird deal because it's hard fighting a friend, but at the same time, it's part of the show."

Cope, a 2-to-1 underdog against O'Neil, said he was glad to silence some doubters with the win – but he was used to it from his stint in the TUF house. He beat Javier Torres and preseason favorite Shamar Bailey from coach Junior dos Santos' team to get to the semifinals, where he lost to eventual runner-up Ramsey Nijem.

"I was underestimated the whole season," said Cope, who fought for coach Brock Lesnar's team on the show. "At one point, (Team dos Santos coach) Lew Polley was telling everyone I was a guy they could just walk through. I think Javier thought that. And then Shamar, too. Chuck came in after the fight (Saturday) and he was kind of amazed, like, 'Dude, you got way better.' I said, 'Well what do you think I did, Chuck? Just start partying? No. I took two days off and went right back in the gym.'"

Cope isn't sure what will come next for him, but he's plenty excited to take it as it comes and enjoy the new moments.

"When I was a kid, 9 years old, I used to think about what it would be like to fight in the UFC," Cope said. "Now I'm fighting in the cage, I'm on TV, I've got Bruce Buffer in the middle, I've got Joe Rogan interviewing me – it's a surreal experience. So I take it all in and I'm having as much fun as possible."