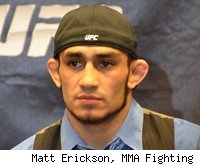 LAS VEGAS -- Clay Guida thought his fight with Anthony Pettis was Fight of the Night-worthy before it happened. This time, he was trumped.

The light heavyweight slugfest between Kyle Kingsbury and Fabio Maldonado got the UFC's coveted Fight of the Night award at the Season 13 Finale of "The Ultimate Fighter," and both fighters got $40,000 bonus checks for the effort.

In addition, UFC president Dana White gave the Submission of the Night bonus to Reuben Duran, who had the night's only submission, and the Knockout of the Night to Tony Ferguson, this season's TUF champion.

The Kingsbury-Maldonado fight likely got serious competition from the Guida-Pettis co-main event. But with plenty of traded knees and punches, and a close decision – 29-28, unanimously, for Kingsbury – it beat out a mostly one-sided Guida win over Pettis.

In the night's first bout, Duran and Francisco Rivera battled back and forth for a close first two rounds, with Duran staving off several Rivera guillotine attempts. But in the third, Duran turned the tables and after a takedown, he took Rivera's back and sank in a fight-ending rear naked choke.

"I'm glad I got the win, but I was a little disappointed with my performance," Duran said. "I just couldn't get comfortable out there. The fight seemed pretty close through the first two rounds, so I knew I had to do something. I saw that choke coming a mile away, and that second time I got it on him, I knew it was over."

In the main event, Ferguson knocked out TUF 13 housemate Ramsey Nijem with a massive left to take not just a UFC contract and the TUF 13 title, but a $40,000 bonus, as well.

A pair of preliminary card fighters had to wait until night's end to find out they had been bypassed for the Knockout of the Night bonus. In the second fight of the night, Scott Jorgensen struggled early against Ken Stone – but then knocked him out from the ground in guard. And George Roop turned in a dominating performance against heavy favorite Josh Grispi before finishing him in the third with a body shot.