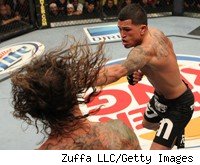 LAS VEGAS – On Thursday, Clay Guida was asked after his workout if the lightweights that merged over from the WEC – and most importantly, his opponent Anthony Pettis – were worthy of the UFC.

Pettis didn't do anything to make anyone think he doesn't belong in the UFC on Saturday night, despite a 30-27 unanimous decision loss to Guida at "The Ultimate Fighter" Season 13 Finale. But he said after the fight he now knows he has some work to do.

"I feel I had some holes in my game, and Clay Guida and (coach) Greg Jackson did of a good job of having a good game plan," Pettis said after saying he had no regrets for taking the fight instead of waiting out a lightweight title shot that had been promised him in December. That shot was put on hold after a draw between champion Frankie Edgar and Gray Maynard, who now are recovering from training injuries before a rematch later this year.

Guida was able to control the fight using an offense that consisted primarily of takedowns and ground control. He took Pettis down five times in the fight and passed his guard four times – three times in the third round. And according to FightMetric, he also outstruck Pettis.

Pettis said it was that control by Guida, which kept him on top much of the fight, that earned him the win. Pettis worked repeatedly for triangles and armbars from guard, but Guida was able to stay busy enough to keep out of imminent danger.

"I think control-wise, he was on top and he did a good job staying on top," Pettis said. "I couldn't get my submissions off – I attempted a lot, I hit him a lot, but I understand how the game works. He controlled things, and he won. I knew I had to get off my back to deal with Clay. But I'll work on it and come back stronger."

Guida said Pettis' game from guard gave him problems, as did several highlight-reel kicks that just missed, bringing back memories of his kick off the cage against Ben Henderson when he won the last WEC lightweight title in December.

But if Guida had any doubts on Thursday whether Pettis was ready for the UFC, they were answered Saturday. Guida seems to think so.

"He must have thrown 10 or 12 triangles and armbars," Guida said. "And he hit me lights-out a couple times. Punched me, elbowed me – tough as nails. He's got a real tricky guard, and he's a real talented kid."