Long Way From His TUF Days, Ed Herman Glad to Be Back 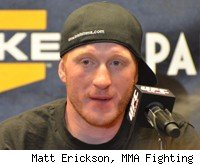 LAS VEGAS – Both Ed Herman and Tim Credeur had to have had some jitters heading into their fight Saturday. With both out of action for nearly two years, some cage rust would be expected.

But if Herman had any, he shook it off quickly – and is glad he did. Herman, back for the first time since August 2009, and coming off two knee surgeries, shut down Credeur with a big first-round TKO. And he's already talking about putting himself in a position to contend in the middleweight division.

Herman (20-7, 5-5 UFC) has had an up-and-down UFC career following his loss in the TUF 3 title bout to Kendall Grove. But after being out of action for so long, it was his original jumping-off point – "The Ultimate Fighter" – that may have jumpstarted his career on Saturday night at the TUF 13 Finale.

"It was cool to be here on the Finale with the guys coming off Season 13 – 10 seasons after mine is kind of crazy," Hermand said. "It meant a lot, and it gave me the opportunity to be on the main card. If it was a big pay-per-view, I may not have had that opportunity. So to get out there and let people know I'm still fighting – when you're not on TV for a while, people kind of forget you – it was good to have that opportunity."

Herman even said he would love to work his way toward a rematch with Grove and had mixed feelings about his TUF 3 Finale opponent's loss to Tim Boetsch last week at UFC 130.

"I was a little bummed (that Grove lost)," Herman said. "I was hoping he could go on a run, too, so we could have a big rematch and get some hype behind it. I was bummed to see him lose, but at the same time I've trained with Tim, so I was glad to see him win."

While Herman likely would have taken a win any way it would come on Saturday night, he said getting a knockout – and so quickly – makes his return extra special.

"I saw him crumble and his eyes roll in the back of his head," Herman said. "The win is unreal – a dream come true for me. After being out two years with injury and really starting to question myself, it feels great to show the UFC I still have what it takes."