In UFC Lightweight Division, Many Contenders but No Clear Next After Maynard 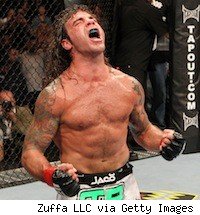 Clay Guida beat Anthony Pettis on Saturday night. Of course he did. When it comes to MMA, Guida is an unrelenting energy field that shakes up everything in his path, and while he took a big step forward in his own career, he only served to further muck up the waters of the UFC lightweight division. As you probably know, before Saturday, Pettis was the No. 1 contender in waiting, and just needed to get past Guida at the TUF 13 Finale to keep his place in line. As often seems to be the case when fighters risk their shot at gold, he fell short, and now must rebuild his resume while his name falls out of the contenders' conversation.

In a sport that is constantly looking forward, we always want to know who is next, and right now, that is a question with no answer. The only thing we know is that Gray Maynard is supposed to get the next title opportunity against Frankie Edgar, probably in the late summer or early fall.

But beyond that, it's anyone's guess.

Much will depend on what happens between now and Edgar-Maynard III, whenever that might be. For example, Jim Miller is supposed to face Ben Henderson at the UFC on Versus show scheduled for August 14. Miller has won seven straight fights, including two finishes in a row. A win over Henderson would make it difficult to discount his chances, and even harder to say he doesn't have the current best resume out of all the hopefuls.

Amazingly, the only two career losses of Miller (20-2) came against Edgar and Maynard, respectively, giving the UFC an easy storyline to push regardless of which man wins. But all that, of course, is dependent on Miller himself winning first. Given Henderson's wrestling prowess and ability to stay out of submissions, that's no sure thing.

Guida, of course, has his own case to make. He's now won four in a row with his win over Pettis. While he received some criticism for his somewhat conservative performance in the win, to be fair we must note that Guida had finished three opponents in a row before that.

Now here's the problem. Even if you say one of those guys is definitively above the other, either of them could lose before a date with the Edgar-Maynard winner ever gets made. As we noted, Miller's already got an upcoming bout set up, and Guida might also take another fight while he's waiting for the champ and No. 1 contender to finish off their trilogy. The UFC has cards to fill, and Guida isn't exactly known for saying no to fights.

We don't have a specific date for Edgar-Maynard because the champ is still recovering from a back injury, and so we can't yet assume he'll be ready to go, even by the fall. No one except Maynard is likely to sit around and wait for him, and even he only for so long. Until then, we'll be forced to play the speculation game.

Aside from Miller and Guida, things get really interesting. Who else is in the running? Among UFC fighters, you'd have to say that Melvin Guillard -- winner of four straight, and six of his last seven -- is probably the next closest, while Dennis Siver -- 6-1 in his last seven -- also has an argument.

Other possibilities? How about Strikeforce lightweight champion Gilbert Melendez? With its recently announced Nick Diaz vs. Georges St-Pierre, champion vs. champion fight, the UFC opened a Pandora's box, giving us free reign to speculate about these types of possibilities. If it is the best fight, or the fight people most want to see, the UFC will have no choice but to consider it. Given the depth of the division, it seems less likely than pulling Diaz into the octagon, but it's not an impossibility.

So, to recap, as it stands in early June, Miller, Guida, Guillard, Siver and Melendez are the five likeliest challengers. But there are far too many variables involved in any decision about who's next, making any guesswork premature. Instead, we'll be forced to wait and see how things play out. The opportunity is there for the taking, and Guida just fired the latest shot, so it's up to the rest of the hopefuls to respond or be left behind. Until then, we get to sit around, debate, and play amateur matchmaker. But that's half the fun of our sport anyway. The lightweight division is suddenly the wild, wild west, a land of opportunity and possibility. Hitch a ride on your respective war wagon, but come armed with patience. It's going to be a long and bumpy ride on the way to the gold rush.