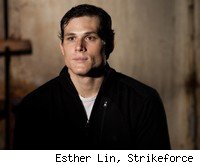 Strikeforce and Showtime on Saturday made official a pair of bouts for its July 30 card outside Chicago.

Women's welterweight champion Marloes Coenen will defend her title against Miesha Tate on the Strikeforce: Fedor vs. Henderson card at the Sears Centre in Hoffman Estates, Ill., a northwest Chicago suburb. In addition, the promotion made official a light heavyweight bout between Muhammed "King Mo" Lawal and Roger Gracie.

Both fights will take place on the main card in support of the headlining superfight between light heavyweight champion Dan Henderson and heavyweight legend Fedor Emelianenko.

Coenen fights for the first time since defeating Liz Carmouche at Strikeforce's March event in Columbus, Ohio. There, she stopped Carmouche with a fourth-round triangle to win in a fight that Carmouche was mostly dominating. It will be her second defense of the title after winning it against Sarah Kaufman in October.

Coenen was originally scheduled to face Tate in march in Columbus, but an injury kept her out and Carmouche stepped in on late notice to fill the void.

And Lawal will return for the first time in nearly a year, since losing his light heavyweight title in his first defense against Rafael Cavalcante, the first loss of his career. Gracie comes in unbeaten at 4-0, all by submission. But he has fought just once in the last year – a submission win over Trevor Prangley in January.

Strikeforce: Fedor vs. Henderson will air live on Showtime.