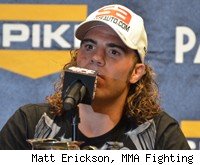 LAS VEGAS -- And just like that, Clay Guida and Anthony Pettis may have traded places.

Pettis, who was first in line for a lightweight title shot, passed on waiting for a Frankie Edgar-Gray Maynard winner after their January draw. He asked for Guida. And Guida made him pay on Saturday night.

Guida steered clear of most of Pettis' highlight-reel offense, landed takedowns each round and grinded out a unanimous decision 30-27 sweep of Pettis, who was a more than 2-to-1 favorite, at "The Ultimate Fighter" Season 13 Finale.

By knocking off the previous top UFC lightweight contender, Guida, who has now won four straight, likely finds himself as the top contender. But because the Edgar-Maynard rematch is on hold due to injuries for the two, Guida could be on hold for a while, himself – if he were to be given the next title shot and elected to wait.

But on Saturday, UFC president Dana White told MMA Fighting's Ariel Helwani that won't be the case. White said despite Guida's win over Pettis, Jim Miller, who is riding a seven-fight winning streak, is still ahead of Guida in the rankings.

"Ben Henderson and Jim Miller, who knows?," Guida said. "Jim Miller, I think could be the frontrunner. But everyone who sees me fight knows I fight the toughest competition. I'd love to get that shot – I've been here five years in October (and) 9-5 in the UFC does not sit well with me. That's a very average record for me."

Henderson, the former WEC champ who lost his title to Pettis (13-2, 0-1 UFC) in December, fights Miller in August.

Guida said he wanted an impressive win – a stoppage – to show White and matchmaker Joe Silva he was ready to be next in line.

"I didn't want to see it go to the judges," Guida said. "Obviously a dominating finish would've looked more highly in the eyes of the UFC."

Pettis attempted several "Showtime"-type kicks, including one from his back, that kept Guida concerned about distance. But Guida used takedowns in every round to execute his offense and grind out the victory. Afterward, Guida said takedowns were a big part of his game plan in the fight, as well as staving off Pettis' offense.

In the main event, Tony Ferguson and Ramsey Nijem met to determine the Season 13 winner of "The Ultimate Fighter." After a back and forth opening few minutes, Ferguson landed a big left hook that stiffened Nijem immediately, dropping him to the canvas. Ferguson landed one more shot before the fight could be stopped.

Ferguson became Season 13's villain late in the season, and said coming in to the fight that he regretted how he came off on the show – and that he hoped to learn from it and set a better example for younger fans in the future. He reiterated that sentiment immediately after collecting his trophy from White.

"I learned a lot about myself in (the TUF house)," Ferguson said. "I've got a lot of guardian angels up there looking after me. I know (Nijem) caught me a couple times, but I weathered the storm."

A feel-good story saw Ed Herman return from a layoff of nearly two years – and two knee surgeries – to score a quick 48-second TKO of Tim Credeur, who was also coming back following a long layoff. A short right uppercut from Herman dropped Credeur, and he finished him quickly with three shots on the ground.

In the night's biggest upset, George Roop, beat Josh Grispi with a third-round TKO from a body shot. Grispi was a 6-to-1 favorite in the fight. The loss is the second straight for Grispi, who was supposed to get a featherweight title shot at UFC 125 in January against Jose Aldo. Aldo got injured, Grispi took a fight with Dustin Poirier, and was upset then, too.

Roop reteamed with coach Shawn Tompkins for the fight after going without him in January for his fight with Mark Hominick – also a Tompkins student and one of Tompkins' best friends. Roop said he was glad to get his first UFC win out of the way.

"It's been a struggle here lately, and it feels good to get this behind me," Roop said. "My game plan worked, and I'm happy about my performance, but there's still work to do. Finishing the fight that way was incredible. I hadn't planned for it happen like that."

Grispi said he'll have to get past the mental anguish that might hit him after another setback.

"I need to stop overthinking it," Grispi said. "It's just a fight. I felt like my submission attempts were solid, but I need to go back to the drawing board. I'm only 22 and I've got time to grow in this sport."

White gave the event's bonus awards to Kyle Kingsbury and Fabio Maldonado for Fight of the Night, Reuben Duran for Submission of the Night and Ferguson for Knockout of the Night. Each won an additional $40,000 bonus.