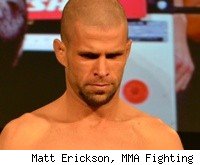 The fight was effectively a third-place match for this season of The Ultimate Fighter, as O'Neil and Cope lost semifinal fights to Ramsey Nijem and Tony Ferguson, the two men who will compete in Saturday night's main event. So Cope can be considered the third place finisher of Season 13 of the UFC's reality show.

Cope said afterward that O'Neil is a good friend whom he was honored to fight.

But while Cope showed that he's better than O'Neil, he wasn't extremely impressive. Both Cope and O'Neil looked sloppy in their stand-up exchanges, with plenty of misses and wasted movement.