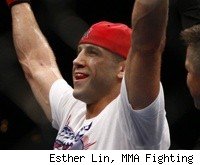 All three judges scored the fight 29-28 for Kingsbury, a former Ultimate Fighter contestant who is now on a four-fight winning streak in the UFC. It was a back-and-forth battle between Kingsbury, a former college football player who had the size and strength advantage, and Maldonado, a Brazilian former pro boxer who was the technically superior striker.

"I'm very happy I came away with the win," Kingsbury said. "I thought I earned it, but I tell you what: I've never been in a harder fight in my life."

The victory improved Kingsbury's professional MMA record to 11-2, and with four straight wins Kingsbury may now be ready for a step up in quality of competition in the UFC's tough light heavyweight division.

Maldonado falls to 18-4, and he looks like a guy who should drop down to middleweight: His striking technique is solid, but he was overmatched in the clinch by the bigger, stronger Kingsbury, who was able to grab Maldonado, control him in the Thai plum, and land knees to his chin. That was the difference in how the judges saw this fight.