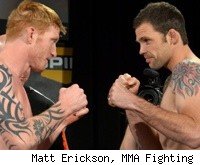 This is the TUF 13 Finale live blog for Tim Credeur vs. Ed Herman, a middleweight bout on tonight's Spike TV card from the Palms Casino Resort in Las Vegas.

Herman (19-7) and Credeur (12-3) are both former The Ultimate Fighter contestants and are also both returning after nearly two years away from the sport.

Round 1: Credeur and Herman touch 'em up and we get started. Herman with a nice outside leg kick. Credeur answers with a pair of jabs. Herman gets inside and drops him with a right uppercut. Credeur goes down, and Herman pounces with a right-left-right on the ground before Herb Dean can shut it down. Quick work for Herman in his return after nearly two years, and a tough return for Credeur, also coming back after a long layoff.