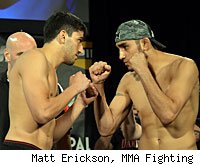 This is the TUF 13 Finale live blog for Ramsey Nijem vs. Tony Ferguson, the finals of this season's Ultimate Fighter welterweight competition from the Palms Casino Resort in Las Vegas.

On the show, Nijem (4-1) was the fourth pick on Team dos Santos, eight overall and Ferguson (10-2) was the third pick on Team Lesnar, fifth overall.


Round 1: Quick start, and a quick takedown for Ferguson as Nijem falls into half guard. Ferguson short-slams Nijem from teh ground as Nijem hangs on. Nijem scrambles out and reverses, but Ferguson lands a nice right – which is answered by Nijem, who keeps coming forward. Inside leg kick from Ferguson is answered by a pair of short Nijem jabs. Traded body kicks, then a teep from Nijem and a roundhouse right. Ferguson jabs, then lands a left hook. A flurry from Nijem has Ferguson to a knee, but he uses the position to push Nijem to the cage. Nijem walks up quickly, though, and we restart on the feet. Both finalists miss a few punches. But out of nowhere, Ferguson lands a massive left hook that hits Nijem right on the chin. He goes stiff immediately as Ferguson lands one more on the ground. With a big knockout, Tony Ferguson is your net winner of "The Ultimate Fighter."