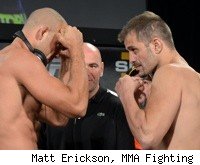 This is the TUF 13 Finale live blog for Kyle Kingsbury vs. Fabio Maldonado, a light heavyweight bout on tonight's Spike TV card from the Palms Casino Resort in Las Vegas.

Kingsbury (10-2) was a season eight contestant on TUF and has won his last three UFC fights. Maldonado (18-3) won his UFC debut last October against James McSweeney via TKO.


Round 1: Kingsbury's walkout to "The Power of Love" by Huey Lewis and the News treads some new MMA ground. But if it pumps him up ... And apparently it does. He comes out with big knees, repeatedly, and somehow Maldonado stays standing. Maldonado is rumored to have been battling a bad virus coming in to the fight, and he weighed in at just 203 pounds, lending some credence to that claim. Two stiff left jabs from "Kingsbu" land, and he grabs a Thai plum and lands another knee. Then he powers into a takedown. But Maldonado gets a guillotine that Kingsbury has to squirm out of. Kingsbury lands some jabs and kicks, but Maldonado stays in and gets Kingsbury's attention with a couple strikes of his own. Kingsbury gets an easy trip takedown, landing in half guard, and looks for short elbows. Maldonado scrambles out as Kingsbury lands another knee. More knees from Kingsbury close the round, and he slips landing the last one. It's an easy 10-9 round for Kingsbury on the MMA Fighting card.

Round 2: Some traded jabs, then a big shot from Kingsbury for the takedown. He regroups and looks for some offense from Maldonado's half guard. But a scramble sees Maldonado get back to his feet. Big knee to the body from Kingsbury, then a high kick that is partially blocked. Kingsbury continues with the Thai knees, but Maldonado won't go down. He then works for a takedown, but slips and hits the mat. Maldonado tells him to stand up. Once he does, it's not long before he has another takedown. Maldonado works for a choke, but nothing. Then he eats another knee. With a minute left in the round, Kingsbury keeps pressure on Maldonado against the fence. Maldonado looks for a knee, but misses. It's another 10-9 round for Kingsbury on the MMA Fighting scorecard.

Round 3: They touch gloves to start the third. Maldonado lands a few nice jabs, but it's not long before Kingsbury is throwing knees again. Maldonado punches himself in the chin and tells Kingsbury he can take it. So Kingsbury throws a pair, then shoots for a big takedown. Back on the feet, Maldonado's face is red and bloodied. But he's pushing forward. He may have slightly more left in the gas tank than Kingsbury. Kingsbury's corner calls for him to shoot. He finally does, but can't get the takedown. After some more clinch work, Maldonado is able to get the fight to the ground, but he does little with it and the ref stands them up. Kingsbury shoots for a single, but can't get it. He jabs Maldonado's mouthpiece out. Maldonado picks it up and puts it back in just in time to eat some more jabs. He gets a soft takedown at the end of the round, but nowhere near enough. Kingsbury gets the 10-9 round on our card, and we have the fight for him 30-27.