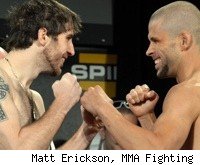 This is the TUF 13 Finale live blog for Chris Cope vs. Chuck O'Neil, a welterweight bout on tonight's Spike TV card from the Palms Casino Resort in Las Vegas.

Cope (4-1) was the fifth pick on Team Lesnar, tenth overall and O'Neil (8-3) entered the show as a reserve on Team Lesnar. He and O'Neil reached the semifinals of the TUF 13 welterweight bracket, where they lost to tonight's finalists, Ramsey Nijem and Tony Ferguson, respectively. O'Neil (8-3) lost his first fight TUF fight to Zach Davis by triangle, but was given a second chance as a wild card.

Round 1: The crowd is loving the "Woooo!" shouts that Cope made famous this season on TUF. Josh Rosenthal gets things started. They touch gloves and we're rolling. Left-right from O'Neil opens things up, and he follows by trying to kick Cope's left leg out from under him. They clinch briefly, then separate and Cope lands a nice kick. High roundhouse right kick from O'Neil misses. Cope lands a left. Traded jabs, and then a big one from Cope gets the crowd's attention. They trade kicks and jabs, then Cope lands a spinning back kick to the midsection. Then a left high kick is partially blocked. It's a close first round, but we'll give it to Cope 10-9.

Round 2: Cope continues riling the crowd with his "Whooo!" yells. As the round starts, the two trade jabs and kicks. After a minute, Cope ties them up along the cage. O'Neil reverses position, then the two split apart. O'Neil checks a Cope leg kick. More jabs from each. O'Neil misses a spinning back kick. Cope keeps coming forward and is landing just a few more shots than O'Neil. But there's nothing yet that has anyone in trouble. Another left kick from Cope keeps O'Neil at bay. Cope throws a Superman punch and leads it into a leg kick, then another quick Superman punch. Then another as the round winds down. We'll give Round 2 to Cope, 10-9.

Round 3: A touch of gloves for this last round. O'Neil lands a nice right jab. Cope counters with a kick. Then a body shot. Then he ties O'Neil up along the cage and lands a left. O'Neil reverses position, but Cope breaks it off. Right to the body and left to the head from Cope. Jab fakes from Cope lead into inside leg kicks. Body shot lands from Cope. He then just misses a high kick, but follows with a nice kick to the body. They tie up, and Cope looks for knees as O'Neil tries to take the fight to the ground. They trade a little in the clinch, then split up with 90 seconds left as Cope gives another signature shout. He then just misses a spinning back kick, but follows it with a big spinning back fist that lands. O'Neil will probably need a home run to win this fight, but he's not doing much to go for it. Cope lands a nice left as he yells something to Chuck. Cope comes forward with more kicks as the fight draws to a close. It's another 10-9 round for Cope on our card, and we have the fight scored for him 30-27.