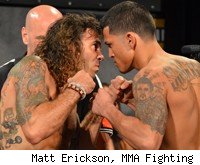 This is the TUF 13 Finale live blog for Anthony Pettis vs. Clay Guida, a lightweight bout on tonight's Spike TV card from the Palms Casino Resort in Las Vegas.


Round 1: One of the year's most highly anticipated fights, we've been waiting for this since late January, when Dana White announced it. Steve Mazzagatti brings them in for instructions and they get right up in each other's faces. Pettis is a -260 favorite to Guida's +200. Guida bounces around and fakes jabs. He fakes a spinning back fist. Pettis stays patient and holds the center of the cage. A high left kick smacks against Guida as he blocks it, and when Pettis throws another one, Guida moves in catches it and takes the fight to the ground. Pettis looks for a triangle, but it's not there. The crowd soon starts a Guida chant, and he postures up and looks for ground and pound. He lands a few shots while watching out for Pettis' triangle attempts and armbar attempts. Halfway through, Pettis is stuck on his back in guard, trying to defend. But from his back, he throws a roundhouse kick that just barely misses Guida. Guida shoots back in and clinches up against the fence, landing another takedown. Had Pettis landed that kick, after his legendary kick against Ben Henderson in December, he might have gotten his own comic book. Pettis is scrapping on the ground, looking for the triangle and defending Guida's ground and pound at the same time. WIth 10 seconds left, Guida throws some knees to the body. It's an exciting first round, and Guida takes it 10-9 on the MMA Fighting scorecard.

Round 2: Stamina is not going to be an issue for either of these guys, and they both bounce early. Pettis clips Guida with a left, and as Guida charges back in he eats a short right. Guida kicks outside, then inside. Guida stays careful, watching for Pettis' rangy kicks. Then he backs up, shoots and scores a takedown along the fence. Pettis works light body shots with his back against the cage. Pettis tries to wall walk, and manages to get back up as the shorter Guida struggles to hold him down. Guida keeps his hold, though, and keeps grinding. He gets a single and looks for the takedown, but Pettis bounces out and Guida blocks a left kick to the head that would've been on the money – it hit right off his glove, perfectly blocked. He goes for a spinning back kick and lands it on the fence as the crowd goes nuts. With a minute left, Guida is showing no signs of slowing, and really no fear of the fight-ending kicks Pettis brings to the table. He stays in tight as Pettis throws a right, shoots and takes him down yet again. Guida will hope to grind out the round from on top in teh center of the cage, and he throws a couple elbows as Pettis again tries for a triangle. They scramble, and Pettis gets one – but Guida scrambles out just at the horn. It's another 10-9 round for Guida on our card, as he's controlled the pace, gotten takedowns and stayed away from most of Pettis' high-flying offense.

Round 3: Pettis has probably been told he needs to end the fight. Guida stays aggressive, though. He throws a left kick to create some distance, then lands a punch that leads to another takedown in the center of the cage. Pettis pulls his head down and looks for a triangle as Guida fights back and tries to pass and throw elbows. Pettis is relentlessly going after the triangle, and Guida is relentless in his defense of it. Pettis has managed to get to the cage and starts to wall walk as Guida holds on. Though it's not as exciting as when they're on the feet, Guida isn't exactly just laying here. He's trying to pass and throwing ground and pound, trying to stay busy. Pettis gets back to his feet with 1:50 left, and a scramble has Guida on the wrong end of a takedown. Pettis gets his back and looks for a rear naked choke. Guida defends well, and hell have to keep it up for another minute. He scrambles out, amazingly, and the growd erupts. Guida again starts working ground and pound from the top, getting close to taking Pettis' back. He throws knees, and with 10 seconds left, he's going to ride out a likely win. MMA Fighting gives Guida the round 10-9, though it was the closest of the three, and gives him the fight 30-27.