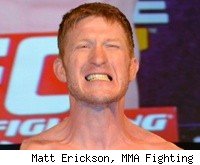 Ed Herman and Tim Credeur had both been out of MMA for almost two years before they met at Saturday night's Ultimate Fighter Finale in Las Vegas. When they finally got into the cage, it lasted less than a minute.

Just 45 seconds into the first round, Herman landed a huge uppercut to Credeur's chin, knocking him down, flat on his back on the canvas. Herman pounced and landed a couple of hard punches on the ground to knock Credeur out, and the fight came to a sudden end, with Herman earning a first-round knockout. The official time of the stoppage was 48 seconds.

The victory improved Herman's professional MMA record to 22-9, and got him a much-needed return to the win column. After two knee surgeries, Herman's career may now be back on track.

"It's unbelievable," Herman said. "I can't describe it. Oh my God, it's amazing."