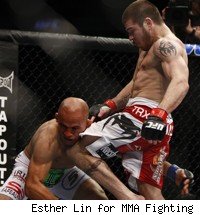 White told MMA Fighting on Saturday that Jim Miller "is still ahead of [Guida]" in the organization's lightweight rankings despite Guida's win on Saturday night.

Miller (20-2) has won his last seven fights in a row. He is scheduled to meet Ben Henderson at UFC on Versus 5 on Aug. 14 in Milwaukee.

Current lightweight champion Frankie Edgar was scheduled to defend his title against Gray Maynard at last week's UFC 130, but injuries suffered by both fighters forced the bout to be canceled. It has yet to be rescheduled, but White said last week that he hopes to rebook it in the fall.

Miller's only two losses have come against Maynard and Edgar. The AMA Fight Club member lost to Maynard at UFC 96 in March 2009 and dropped a unanimous decision to Edgar at Reality Fighting 14 in November 2006.