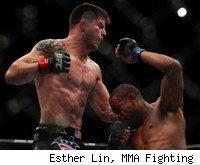 Brian Stann has always been a great story. What he's showing now -- in the year since he moved down to middleweight -- is that he's a great fighter.

Stann, a Naval Academy graduate who earned a Silver Star for service in Iraq, was a decent fighter at light heavyweight. But we heard about him more for what he had done outside the cage than in it. But Stann has looked reborn at middleweight, going 3-0 at 185 pounds with three finishes, most recently knocking out Jorge Santiago at UFC 130.

Find out just how high Stann has moved up in the middleweight rankings below.

1. Anderson Silva (1): The champion defends his belt against the last man to beat him, Yushin Okami, in August. Okami's previous victory over Silva was by disqualification, and Silva is a heavy favorite to avenge his loss and improve his all-time best UFC record to 14-0.

2. Chael Sonnen (2): If Sonnen doesn't get his licensing issues straightened out soon, he'll start to drop down the rankings as a result of inactivity. But he's still the man who gave Silva by far his toughest test in the Octagon, and the man who put a thorough beating on Okami. If he can return to the Octagon as the same fighter he was in 2010, Sonnen deserves to be considered the No. 2 middleweight in the world.

3. Yushin Okami (3): It's not completely inconceivable that Okami could pull the upset against Silva, but anyone who saw their first bout knows that Silva was completely outclassing Okami in the stand-up department before getting disqualified for an illegal kick to the head on the ground. Okami will need to stick to Sonnen's game plan and secure repeated takedowns in order to have any chance of beating Silva.

4. Vitor Belfort (4): Belfort is a tough middleweight to assess because he has fought so infrequently at 185 pounds, but I expect him to show against Yoshihiro Akiyama at UFC 133 that he's still one of the hardest hitters in the sport.

5. Demian Maia (5): Maia's upcoming UFC 131 fight with Mark Munoz should be a great opportunity for him to showcase his impressive Brazilian jiu jitsu skills. The middleweight division's best grappler has looked a little tentative since his fight with Silva, winning a couple of easy decisions rather than going for the finish. That should change against Munoz.

6. Brian Stann (9): How high can Stann go at middleweight? It's almost impossible to imagine him beating Silva, but then again it's almost impossible to imagine anyone beating Silva at 185 pounds. Assuming Silva beats Okami, Stann will be the UFC's highest-ranked middleweight who hasn't already had a crack at the champion. Stann could be one more win away from a title shot.

7. Ronaldo Souza (7): Jacare, the Strikeforce middleweight champion, has expressed frustration at the slow pace of Strikeforce matchmaking. It would make a lot of sense to have Jacare follow the lead of Nick Diaz and enter the Octagon sooner rather than later.

8. Wanderlei Silva (8): His upcoming fight with Chris Leben at UFC 132 is a good chance for the Axe Murderer to get on his first winning streak since he beat Ricardo Arona and Kazuyuki Fujita back-to-back five years ago.

9. Jorge Santiago (6): In his return to the UFC, Santiago ran into a buzz saw in Stann, who took the fight to Santiago and never relented. I'm still optimistic that Santiago can be competitive in the UFC, but maybe not against truly elite middleweight competition.

10. Michael Bisping (10): Bisping will get a promotional push when he coaches against Jason "Mayhem" Miller on The Ultimate Fighter and then fights him in the Finale in December. Bisping has won three fights in a row, and if he makes it four, the UFC might be tempted to put him in a title fight against Anderson Silva in England in 2012.