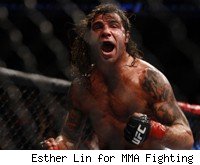 LAS VEGAS – Over the last couple years, unless they're fighting against them, fighters sharing a card with Clay Guida or Anthony Pettis have been able to pretty much assume their post-fight bonus chances will be cut by one-third.

So when their fight against each other was announced earlier this year for Saturday's live Season 13 finale of "The Ultimate Fighter," it wasn't hard to make an early prediction for Fight of the Night, or even Fight of the Year. (Guida has a pair of those to his credit in the last four years, as well.)

Pettis on Thursday told MMA Fighting on a media call that when it comes to putting on a show, it seems to come naturally to him, just like it does for Guida.

"I don't feel any pressure at all to go out there and try to one-up myself or win Fight of the Night," Pettis said. "We always bring exciting fights, and putting two guys like us in the cage together is going to be a great fight. The fans can expect an awesome fight, but the biggest thing is getting your hand raised at the end. We're both looking to win and I think we're going to put on a good show doing it."

Pettis has been waiting a while to put on his next show. After he beat Ben Henderson in December to become the last WEC lightweight champ in history, he watched his immediate UFC title shot hopes go out the window when Frankie Edgar and Gray Maynard fought to a draw at UFC 125. Rather than waiting, Pettis decided to stay busy – and got the red-hot Guida, who submitted Takanori Gomi on the same UFC 125 card.

Pettis said after some aggravation over not getting the title shot he was promised, he came to grips with it.

"At first I was a little mad, but I understand it," Pettis said. "I want there to be a clear champion and I want to show people that I earned being the No. 1 contender. So I don't mind going out there and fighting a couple guys before I get my title shot. That's just going to make me a more well-prepared Anthony Pettis."

With three straight wins – and three straight submissions – to his credit, Guida knows a win could put him right where he wants to be, and that's title contention, perhaps in line to meet the winner of the rematch between Edgar and Maynard, who were scheduled to fight last week, but both went on the shelf with injuries.

"I think a dominating victory will definitely look better in the eyes of Dana White, Joe Silva and the UFC," Guida said. "I think there's a couple of guys up there – Jim Miller is on a tear, but he's fighting one of Anthony's former opponents in Ben Henderson. It's an interesting little debacle in the lightweight division right now. There's a lot of stuff going on, and unfortunately it's going to be a little delayed with the injuries to Frankie Edgar and Gray Maynard. But the most Anthony and I can do is go out and put on a great show, which I know is exactly what we're going to do."

Guida has twice fought at The Pearl at The Palms on TUF Finale cards, and twice he last come away empty handed. In 2007, Roger Huerta submitted him in the third round at the TUF 6 Finale. At TUF 9, his slugfest bloodbath against Diego Sanchez ended in a close split decision loss – and sent Sanchez on to a title fight against BJ Penn.

Guida told Ariel Helwani on Tuesday's edition of "The MMA Hour" he believes the bout will be an instant Fight of the Year candidate. On Thursday, he told MMA Fighting the win is the most important thing, and if the bonus comes, it comes. "To me, the most important bonus check is my win bonus," Guida said.

But somehow, no one, least of all White when he writes the check, likely will be surprised if Guida or Pettis – or both – add yet another bonus to their resumes.

Guida and Pettis fight on the main card of the TUF 13 Finale on Saturday, which airs live on Spike TV at 9 p.m. Eastern. Also on the main card, Season 13 finalists Ramsey Nijem and Tony Ferguson meet to decide the next TUF champion.